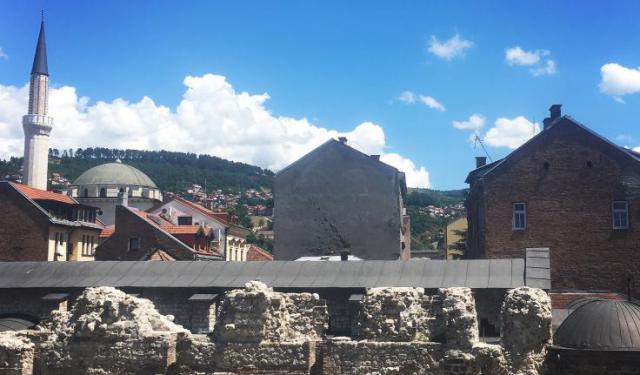 Of all the cities I’ve traveled to over the past couple of years, if I had to pick one that was the most “memorable” or one that I learned the most from, it would hands-down be Sarajevo, the capital city of Bosnia and Herzegovina. A city full of scars from the war that ended in 1996. The fact that I was alive during this conflict (albeit, I was four and completely unaware such a thing was happening halfway across the world) made it so much more chilling and visceral. Buildings stand still tattered with bullet holes and chunks missing from mortar shells, showing just how painful and recent the siege was.

Our tour was a two-day endeavor led by guide Muhamed Vlajcic of Sarajevo Urban Adventures. It was incredibly informative and deeply emotional. Muhamed is young, but the war was so recent that he remembers living through it vividly, and even has some scars of his own.

The Sarajevo Tunnel is a must visit for anyone spending time in the city. This underground tunnel was constructed during the siege in order to transport food and supplies into Sarajevo despite the blockades imposed by the Serbian forces. Today, most of the tunnel has been closed off, but you can walk through a portion of it and visit the house that has now been turned into a museum. ...... (follow the instructions below for accessing the rest of this article).
This article is featured in the app "GPSmyCity: Walks in 1K+ Cities" on iTunes App Store and Google Play. You can download the app to your mobile device to read the article offline and create a self-guided walking tour to visit the attractions featured in this article. The app turns your mobile device into a personal tour guide and it works offline, so no data plan is needed when traveling abroad.