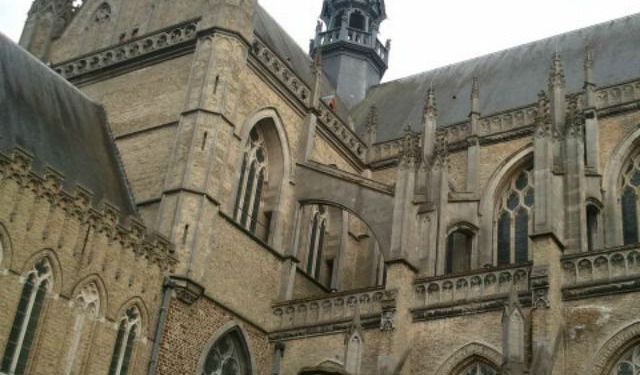 The gate displays the names of 54,896 soldiers who went missing between the outbreak of the war and 15th August 1917.

The gate was too small to hold the names of all the missing. A further 34,000 are commemorated on the panels of the Tyne Cot Memorial in Passendale.

​The Last Post was a bugle call played in the British Army (and in the armies of many other lands) to mark the end of the day's labours and the onset of the night's rest. In the context of the Last Post ceremony (and in the broader context of remembrance), it has come to represent a final farewell to the fallen at the end of their earthly labours and at the onset of their eternal rest.

The service was moving, but somewhat different to the stories I had heard from others. A few people had built it up to be 'extraordinary' going into raptures about how 'you MUST go there.'

Noel and try to avoid extolling sights we've experienced to others - even wonderful things. We may say how much we enjoyed it - but we rarely tell people what they 'must' do. We are all different and enjoy different things - I've often found that when someone insists you see/go to/visit a certain something, the build up is such that it is actually a disappointment. Hence, we let people make up their own minds. ...... (follow the instructions below for accessing the rest of this article).
This article is featured in the app "GPSmyCity: Walks in 1K+ Cities" on iTunes App Store and Google Play. You can download the app to your mobile device to read the article offline and create a self-guided walking tour to visit the attractions featured in this article. The app turns your mobile device into a personal tour guide and it works offline, so no data plan is needed when traveling abroad.