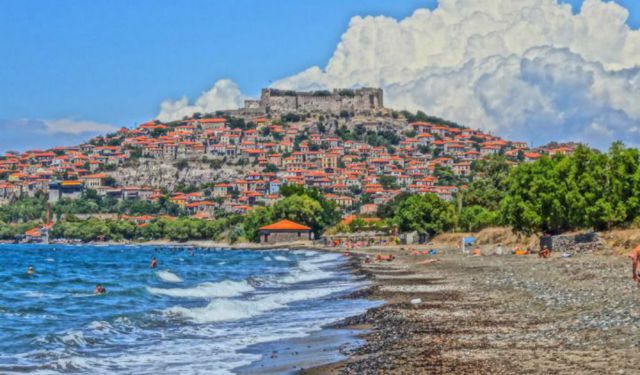 Molyvos is the tourist capital of Lesvos but don't let that scare you away. It is Greek Island tourism at its best with all of the good qualities and few of the bad and attracts visitors who are sensitive to culture and tradition but are still there to have a good time.

Mithymna, or Molyvos as it was called during the middle ages, is truly an amazing town. When you pass through Petra and follow the coastal road you really are unprepared for the dramatic first view you get when you come around that last bend. Luckily there is a place to pull off where you can take it all in, rather then sneak glances and endanger your family and everyone else on the road. The town is situated on a small mountain topped by the dramatic Castle of Mithymna, built by the Byzantines and renovated by the Gattelusis, who were from Genoa and were ceded the island when Francesco Gattelusi married the daughter of the Byzantine Emperor John Paliologos. The original castle which this one replaced, was conquered by none other then Achilles during the Trojan war. (The ruins of the ancient city of Troy are right across the narrow straits between Molyvos and Turkey). There are still ancient ruins scattered around the town including impressive polygonal walls and a few giant holes where archaeologists have begun their slow work after some poor person discovered them while renovating their home. ...... (follow the instructions below for accessing the rest of this article).
This article is featured in the app "GPSmyCity: Walks in 1K+ Cities" on iTunes App Store and Google Play. You can download the app to your mobile device to read the article offline and create a self-guided walking tour to visit the attractions featured in this article. The app turns your mobile device into a personal tour guide and it works offline, so no data plan is needed when traveling abroad.