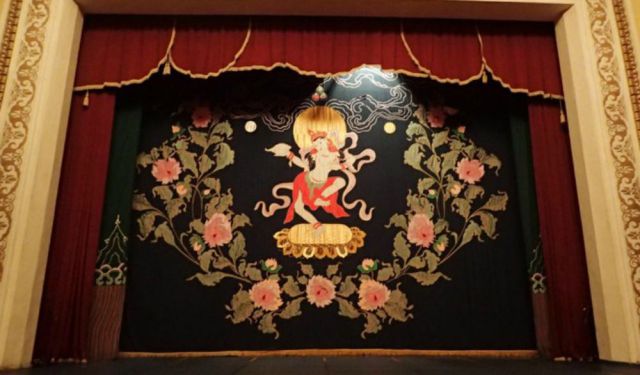 Monastery, Museum, and Music in Mongolia, Ulan Bator, Mongolia (B)

This morning we managed to sleep in until about 5:30am which was pretty good. We just had to kill a little time until hour 7am buffet breakfast which included an egg station, fruit, meats and cheese, Mongolian fare, waffles, spaghetti and meatballs, grilled veggies, kefir, juices, and of course coffee and tea. While the breakfast and room were nice, the most memorable part of the Best Western was the carpet in the elevators which indicated the day of the week! This was very helpful to those of us on vacation!

Around 8:30am, the group loaded on our bright yellow bus which transported us to Gandan Khiid located on the west side of Ulaanbaatar (or UB for short). Gandan Khiid is one of the most important monasteries in Mongolia. Its full name, Gandantegchinlen, translates to “the great place of complete joy”. Along with Choijin Lama Temple Museum, it was one of the few monasteries that survived the religious purge in 1937 under Soviet rule.

This monastery, which is active, was saved in 1944 when US Vice President Henry Wallace asked to see a monastery during his visit. Prime Minister Choibalsan, who carried out Stalin’s religious persecution orders, scrambled to reopen Gandan Khiid to cover up the committed atrocities which included murdering tens of thousands of monks. Gandan remained a “show monastery” for foreign visitors until 1990 when the Soviet Union crumbled and religious ceremonies could recommence. ...... (follow the instructions below for accessing the rest of this article).
This article is featured in the app "GPSmyCity: Walks in 1K+ Cities" on iTunes App Store and Google Play. You can download the app to your mobile device to read the article offline and create a self-guided walking tour to visit the attractions featured in this article. The app turns your mobile device into a personal tour guide and it works offline, so no data plan is needed when traveling abroad.