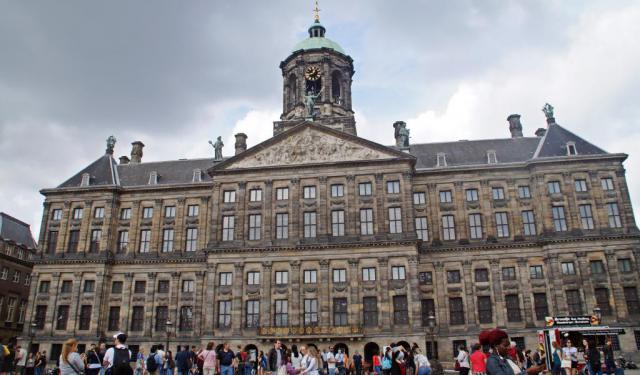 Monday in Amsterdam: In the City of Canals, Amsterdam, Netherlands (B)

When I arrived in the Schiphol Airport at 10.55 PM Sunday evening, I could immediately smell it. Cannabis. Cannabis was in the air, everywhere. I had arrived in the Netherlands, more precisely in its capital city, Amsterdam, one of the only places on Earth where selling and using cannabis is legal. As a child, I’d often travelled to the Netherlands with my family, but only to Rotterdam, from where we’d catch a ferry to England. I really hadn’t seen much of the Netherlands. Having just one day in Amsterdam isn’t a lot, but due to my plans of exploring the country of Luxembourg more thoroughly, I chose to spend less time in Amsterdam, as it’s a city which is well connected with flights to and from Denmark, unlike Luxembourg, so I can always return. I caught a train to the center of Amsterdam and immediately fell for the city as soon as I stepped outside the train station. Buildings were lit up everywhere and the canals looked so inviting. I could easily see what the fuss was about. I had a 2,5 kilometre walk to my hostel, but it was a beautiful evening, so it didn’t matter despite how late it was getting. ...... (follow the instructions below for accessing the rest of this article).
This article is featured in the app "GPSmyCity: Walks in 1K+ Cities" on iTunes App Store and Google Play. You can download the app to your mobile device to read the article offline and create a self-guided walking tour to visit the attractions featured in this article. The app turns your mobile device into a personal tour guide and it works offline, so no data plan is needed when traveling abroad.