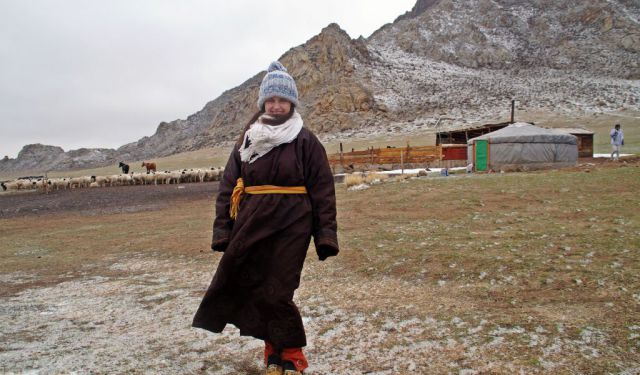 Mongolia: In the Land of the Blue Sky, Ulan Bator, Mongolia (B)

Mongolia was my 12th stop on the journey around Asia and the stop that I was most excited about. It was also the country that I had decided to spend the most time in, mainly because I was so intrigued by the nomadic culture that still exists in Mongolia. In fact, Mongolia is the last country on earth where people are still living as nomads, travelling from place to place with their gers and large herds of animals.

Mongolia is also said to be the least densely populated country in the world with just 3 million people sharing 1,566,000 km2 of land. Mongolia is a landlocked country and apart from a few large lakes and rivers, there is not much water to be found. In fact, only 0,43 % of Mongolia is water. Mongolia is a country of vast lands of varying landscapes, such as endless steppe, mountains and the diverse Gobi Desert. Mongolia has an average of 250 sunny days a year, so it’s not without reason that the country is called “The Land of the Blue Sky”. During my 16 days in Mongolia, I only had a few hours of grey clouds, but the sky cleared quickly afterwards. I also experienced a few days of snow, but even then it was sunny and clear weather. Mongolia is truly an amazing place. ...... (follow the instructions below for accessing the rest of this article).
This article is featured in the app "GPSmyCity: Walks in 1K+ Cities" on iTunes App Store and Google Play. You can download this article for FREE and read it offline on your mobile device.