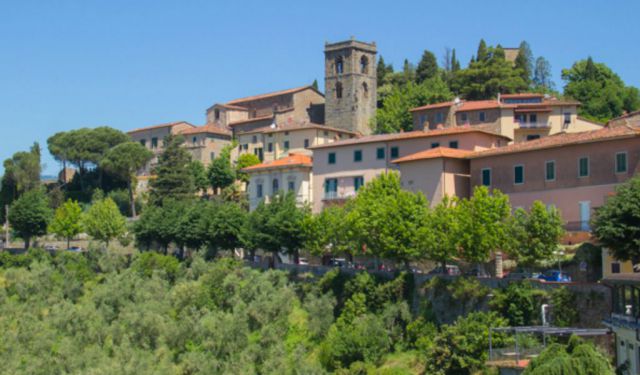 The medieval town of Montecatini Alto (Upper Montecantini) in Tuscany is two hundred and ninety metres above Montecatini Terme. I know because I have walked every one of them both up and down. But it was worth every step to explore this hamlet frozen in the past yet embracing the present. Montecatini Alto is spread across two hills both originally built for defensive purposes. It is hard to believe, as you stroll through its narrow cobbled streets, that due to its strategic position this little town had a very turbulent past.

The town was fortified in 1016 when it belonged to the Bishop of Lucca and the guilds of Maona and Montecatini – guilds had a very important place in Medieval history. By the end of the twelfth century the town had developed into an independent commune with its own constitution. It allied itself with Lucca against Pistoia, its neighbour and later in the wars against Florence. It was finally captured by Florence in. During the sixteenth century it became involved in the feud between Florence and Siena. The town was captured by Siena but it was not long before it was recaptured by Florence. All the battles that had raged around the town had taken their toll and its fortress had fallen into disrepair. After Florence regained control of the town Cosimo de Medici ordered his troops to “destroy the foundations” of the town. For two days and two nights eight hundred Florentine soldiers destroyed the city walls, the towers and the houses. They even took away the doors and their windows and when they had finished very little remained standing of this once powerful, walled city. Plans to establish thermal baths at the foot of its hills were abandoned and it deteriorated into an unhealthy swamp. When the spa resort of Montecatini Terme was developed it revived the fortunes of Montecatini Alto. It was a popular place to visit at midday between spa treatments. Some of the twenty-five remaining towers were incorporated into the built up area. ...... (follow the instructions below for accessing the rest of this article).
This article is featured in the app "GPSmyCity: Walks in 1K+ Cities" on iTunes App Store and Google Play. You can download the app to your mobile device to read the article offline and create a self-guided walking tour to visit the attractions featured in this article. The app turns your mobile device into a personal tour guide and it works offline, so no data plan is needed when traveling abroad.