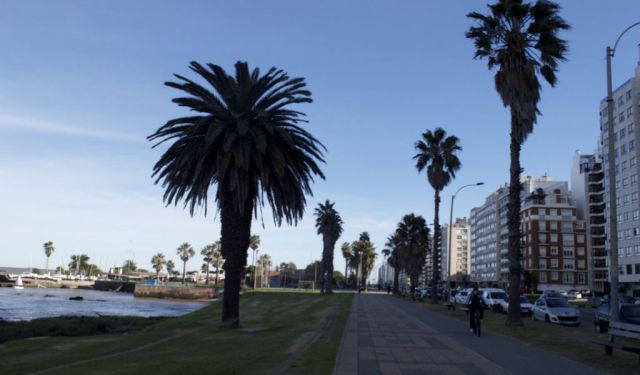 Montevideo, the capital of Uruguay is regarded to be the only capital with a balcony overlooking the sea along 20 kms coastline. Montevideo has consistently been rated as having the highest quality of life among all cities in Latin America.

It is believed that the name Montevideo (Monte-VI-D-E-O) was derived by Spaniards based on the geographical location on the map, so that the MOUNT (hill) is the VI (6th) mount observable on the coast, navigating Río de La Plata from east to west. With the passing of time, these words were unified to “Montevideo”. In its colonial origins Montevideo was limited to the neighborhoods known as Ciudad Vieja or Old City and was enclosed by a star shaped wall, approximately 10 meters in height of which all that remains now is the Ciudadela (Citadel) gate standing on the West side of the Plaza Independencia. The gate was opened at Sunrise and was closed at sunset. Those who arrived late had to sleep outside those walls, exposed to rat or dog bites or attacks by natives. The wall was demolished between 1879 and 1891. ...... (follow the instructions below for accessing the rest of this article).
This article is featured in the app "GPSmyCity: Walks in 1K+ Cities" on iTunes App Store and Google Play. You can download the app to your mobile device to read the article offline and create a self-guided walking tour to visit the attractions featured in this article. The app turns your mobile device into a personal tour guide and it works offline, so no data plan is needed when traveling abroad.