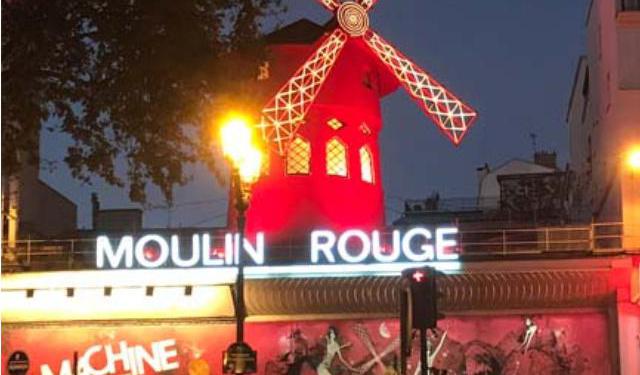 Montmartre and the Windmills of Paris, Paris, France (B)

On a recent trip to Paris, we stayed in the Montmartre area. Montmartre is located on a large hill in the northern part of Paris and as I walked around, I became curious about the windmills I saw there. Windmills aren’t what I would usually associate with Paris, but in this area, there were many references to them as well as a few real ones.

At one time Montmartre was a rural area just outside Paris’ city walls. Its high altitude made it a good place to catch the breeze, and it was teeming with those twirly towers. Today only two of the original structures remain but their influence is still felt.

Probably the most famous windmill in Montmartre is the iconic Moulin Rouge. In French moulin means “mill,” or in this case “windmill,” and rouge is “red.” But the Moulin Rouge was never a real windmill. It was built in 1889 as a “mill of amusement” and has never ground any flour. However, putting a big, red whirligig on top of this place of entertainment was actually in keeping with the history of the locale. ...... (follow the instructions below for accessing the rest of this article).
This article is featured in the app "GPSmyCity: Walks in 1K+ Cities" on iTunes App Store and Google Play. You can download the app to your mobile device to read the article offline and create a self-guided walking tour to visit the attractions featured in this article. The app turns your mobile device into a personal tour guide and it works offline, so no data plan is needed when traveling abroad.