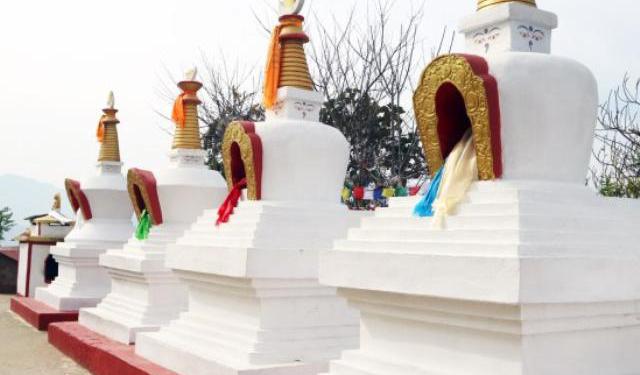 The history behind the Namo Buddha Monastery is an interesting one. The story is a bit long, so I’m just going to share the highlights. In ancient times, there was a king who had three sons. The two oldest sons were known for their skills in the martial arts, and they helped the king govern the kingdom. The youngest was different, for he was very compassionate. His name was Great Being. One day, the three sons went into the forest to hunt and have fun. They spotted a tiger’s den and approached it with caution. The two eldest prepared their bows and arrows, but inside they found a weak mother tiger and her cubs. She was so weak that she couldn’t even lift her head.

The youngest felt compassion for the tiger and asked his older brothers not to kill her because he believed killing things was wrong. But, he was left with a bit of a conundrum. If he wanted to help the tiger, he would have to kill another living being to feed it because the tiger was too weak to hunt for herself. If he didn’t get the tiger food, it would surely die. They all began to walk back to the village, but the youngest prince turned around and returned to the den. He cut his wrist to give the tiger his own blood. After drinking his blood, the tiger pounced and consumed the young prince leaving only his bones. His sacrifice allowed him to move on to a higher realm, and the Namo Buddha Temple was built in his honor on the spot where his family found his remains. ...... (follow the instructions below for accessing the rest of this article).
This article is featured in the app "GPSmyCity: Walks in 1K+ Cities" on iTunes App Store and Google Play. You can download the app to your mobile device to read the article offline and create a self-guided walking tour to visit the attractions featured in this article. The app turns your mobile device into a personal tour guide and it works offline, so no data plan is needed when traveling abroad.