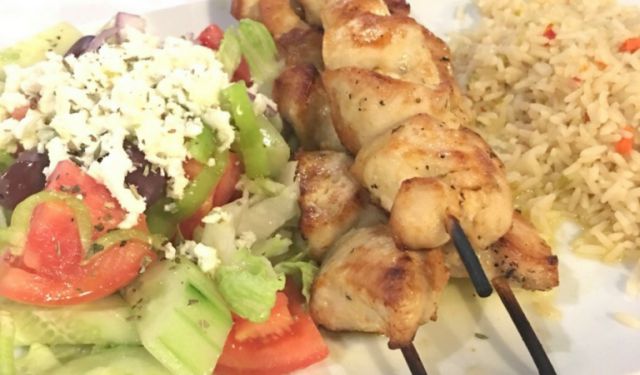 Astoria located in Queens, New York, home to many Greek-Americans and also known as Greektown, is said to have the city’s greatest Greek food and shwarma. It’s a place you should definitely check out when in New York city.

We recently got to try some lovely dishes at Jimbo’s, a nice little family-owned Greek restaurant located in Astoria, Queens.

Yianni along with his brother Peter are the owners of Jimbo’s Restaurant & Bar. To get the freshest food, the brothers go to the Fulton fish market at 3:00am to buy the first catches of the day and they import their olives and cheese straight from their homeland, Greece.

We started our meal with Kria Pikilia – an assortment of three greek spreads that was served with Pita. It had Tzatziki which is a yogurt spread with cucumbers, garlic and olive oil, Tirakofetri – spicy Feta spread with jalapenos and Melitzalonasalata – roasted eggplant spread with fresh herbs.

I am a tzatziki lover so obviously, amongst the three, it was my favorite. The hubs liked the spicy feta spread which was surprising to me since he is not really a fan of feta cheese that much. But he couldn’t stop eating this spread with the Pita. ...... (follow the instructions below for accessing the rest of this article).
This article is featured in the app "GPSmyCity: Walks in 1K+ Cities" on iTunes App Store and Google Play. You can download the app to your mobile device to read the article offline and create a self-guided walking tour to visit the attractions featured in this article. The app turns your mobile device into a personal tour guide and it works offline, so no data plan is needed when traveling abroad.