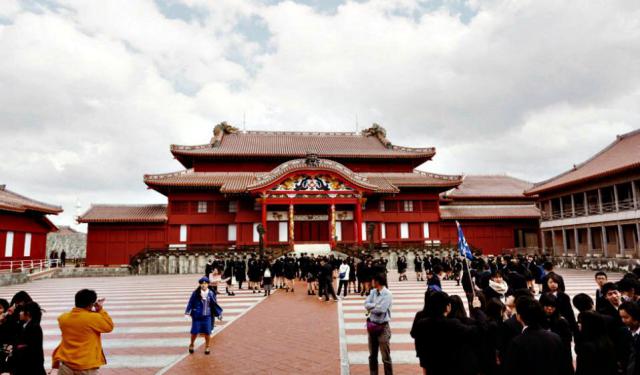 Okinawa in Winter – An Itinerary and Guide, Naha, Japan (B)

If you think of Japan you may think of eclectic mega cities, people who work themselves to coma and extreme forms of pop and entertainment culture. That may apply for a big part of this nation, but in the far south there’s Okinawa – a prefecture geographically closer to Taiwan than “mainland” Japan, dominated by gorgeous beaches, nature and laid-back island life that seems worlds away from Tokyo. It’s Japans favourite summer beach destination with a growing popularity among other Asian countries (especially Korea and China) whereas Western visitors are a rather rare sight (except near the American military base). Tropical vibes in Japan? But how about winters in Okinawa? The climate chart says something about 15° C average temperature in January which sounds far from tropical but still quite comfortable. As my fiance and I were in Bangkok in January, we had not much of a choice anyways. Who knows when we will get so “close” again? So after 5 days on Okinawa Honto (which is the main island) I’m summing up some advice for what to do in Okinawa in winter: ...... (follow the instructions below for accessing the rest of this article).
This article is featured in the app "GPSmyCity: Walks in 1K+ Cities" on iTunes App Store and Google Play. You can download the app to your mobile device to read the article offline and create a self-guided walking tour to visit the attractions featured in this article. The app turns your mobile device into a personal tour guide and it works offline, so no data plan is needed when traveling abroad.