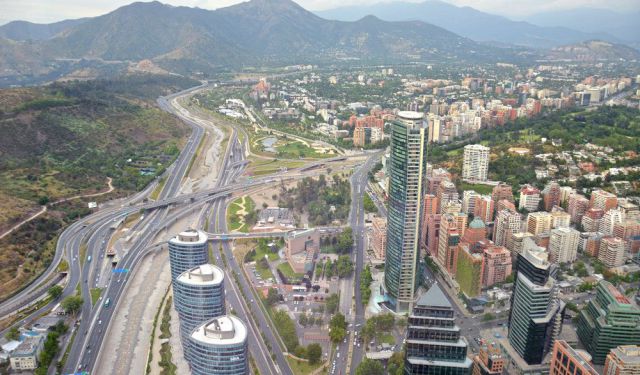 The Chilean capital, Santiago, is one of the most flourishing in South America. The tallest skyscraper in the continent and extremely busy business center filled with futuristic buildings are located here. The city also boasts beautifully renovated older parts which resemble grand European cities. However, surprisingly, from a visitor's point of view the city, despite its charm, Santiago does not have too much to offer. The reason for that is that it's quite similar to other big capitals and lacks those bits of uniqueness you can find in some more off the beaten path places. Nevertheless, if you're visiting Chile, although I wouldn't recommend that you spend too much time in Santiago (Chile has way more exciting places), it's nice enough as a stopover for a day or two. Take a look at what we saw during our short stay.

We spent only 1.5 days in Santiago bit we managed to see quite around the historical center: from the older districts full of magnificent buildings to the highest tower in South America. For us - it was a city good for a few maximum two day visit. It wasn't bad - it was beautiful indeed but it didn't leave any memorable imprint in our minds. Maybe because I do prefer more the unknown and surprising destinations - that's the reason that often the capital cities disappoint me. For example, Punta Arenas and the whole region of Patagonia that we visited later were way more impressive. Probably because they were so different from anything we'd seen before. ...... (follow the instructions below for accessing the rest of this article).
This article is featured in the app "GPSmyCity: Walks in 1K+ Cities" on iTunes App Store and Google Play. You can download the app to your mobile device to read the article offline and create a self-guided walking tour to visit the attractions featured in this article. The app turns your mobile device into a personal tour guide and it works offline, so no data plan is needed when traveling abroad.