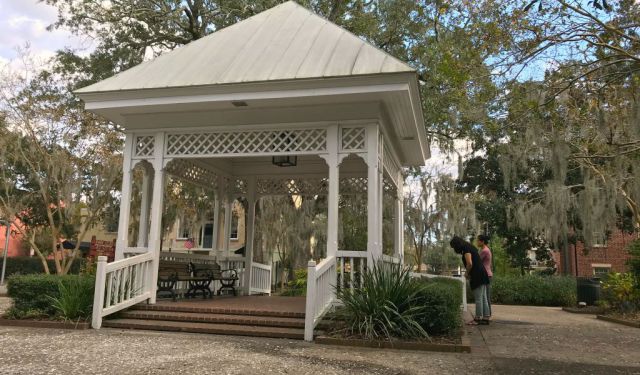 This section will cover the homes and other important buildings on and around Orleans, Chippewa, and Crawford Squares along with Colonial Park Cemetery.

Further east on McDonough you come to the historic Colonial Park Cemetery thought to be haunted by the ghost of Rene Asche Rondolier. Continuing east you arrive at Crawford Square and its flower surrounded gazebo.

Laid out in 1815, this square was named to honor General Andrew “Old Hickory” Jackson’s victory at the Battle of New Orleans. The German Memorial Fountain in the center of the square, installed in 1989, pays tribute to the German immigrants to Savannah, and venerates the 250th anniversary of Savannah and Georgia. ...... (follow the instructions below for accessing the rest of this article).
This article is featured in the app "GPSmyCity: Walks in 1K+ Cities" on iTunes App Store and Google Play. You can download the app to your mobile device to read the article offline and create a self-guided walking tour to visit the attractions featured in this article. The app turns your mobile device into a personal tour guide and it works offline, so no data plan is needed when traveling abroad.