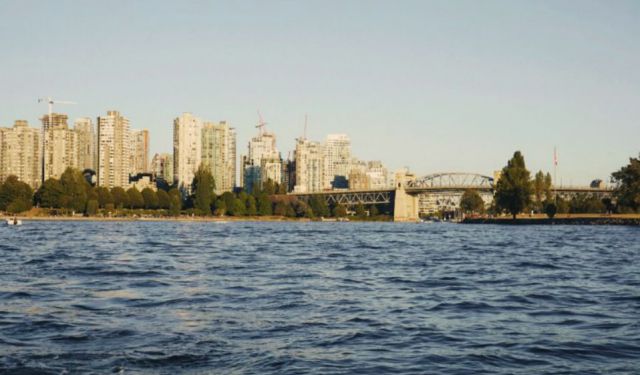 Vancouver: There’s hardly any other city in the world I heard more good things about. And if I look at surveys about quality of living in cities worldwide, Vancouver always is among the top places (competing with my home city Vienna). It’s also home of my far-related and lovely cousin Brianne. It’s been more than three years since she visited me in Austria and I’ve been promising to see her in Canada ever since. Vancouver was our last stop of our epic road trip before we had to return our car back in Seattle. Btw, Brianne is opening Vancouver’s first Zero Waste supermarket called Nada soon! I can’t wait to check it out next time and I’m suggesting you to do so too

And what’s better than a free place to stay? A place with a dog! This is Eddie, Brianne’s furry friend. He’s a real Hawaiian and funny character but he was rather unimpressed by our visit

Anyways, my cousin had a huge surprise for our first evening in Vancouver: With a nice bunch of people she took us out on her sailboat! So we ate, chatted, watched the sunset by the sea and enjoyed the city lights at False Creek. What an introduction! ...... (follow the instructions below for accessing the rest of this article).
This article is featured in the app "GPSmyCity: Walks in 1K+ Cities" on iTunes App Store and Google Play. You can download the app to your mobile device to read the article offline and create a self-guided walking tour to visit the attractions featured in this article. The app turns your mobile device into a personal tour guide and it works offline, so no data plan is needed when traveling abroad.