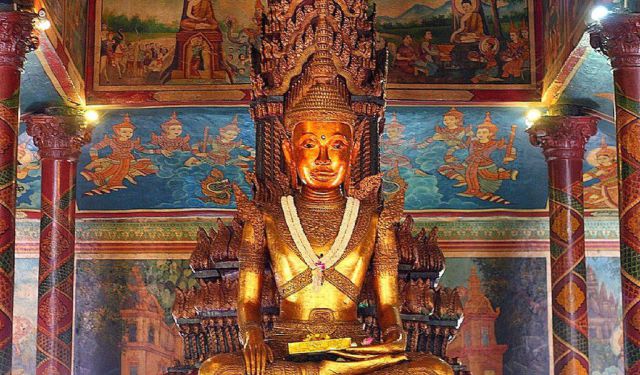 To start with, we absolutely loved Phnom Penh and were more than happy to return here for a second visit while travelling around Cambodia.

The capital of Cambodia was a prosperous city, with the modern Royal palace structure, fine colonial buildings and the grand art deco ‘Central Market’ built by the 1930’s. After independence from France in 1954, the city flourished with the state of the art ‘New Khmer Architecture’ and embraced the further development until horrific events started to take place in 1975.

During the Khmer Rouge era the city was evacuated and the whole country was isolated from the outside world for over 3 years during which time millions of Cambodians were brutally tortured and later killed. The country and it’s economy has suffered for many years afterwards.

Today the capital is chilled and welcoming, offering its visitors a tremendous amount of historical and cultural sights, restaurants, rooftop bars, spas and other simple joys.

We were extremely taken by the Cambodian people’s warmth, friendliness and the knowledge of foreign languages. It was so easy to travel around, order food or have a general chat with the locals. The genuine smiles were everywhere and it felt like people here are celebrating life every day. ...... (follow the instructions below for accessing the rest of this article).
This article is featured in the app "GPSmyCity: Walks in 1K+ Cities" on iTunes App Store and Google Play. You can download the app to your mobile device to read the article offline and create a self-guided walking tour to visit the attractions featured in this article. The app turns your mobile device into a personal tour guide and it works offline, so no data plan is needed when traveling abroad.