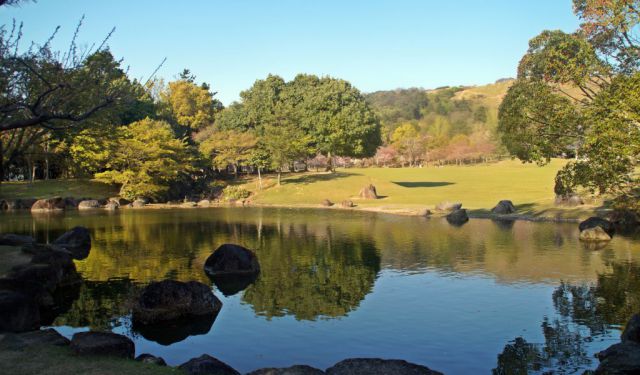 Photo Diary: The Sacred Deer of Nara, Nara, Japan (B)

On the second day in Kyoto, Victoria, Joachim and I decided to go on a day trip to Nara, a city located just 43 km. from Kyoto. Nara is famous for the many sika deer that roam the streets and the large Nara Park. In fact there are over 1,200 wild deer in the city and they are treated like kings!

Years ago, the deer became symbols of deities in Shinto, Japan’s ethnic religion, and were sacred to the citizens of Nara. Following the Second World War, the divinity of the deer was denounced, but to this date, they are still considered a national treasure and therefore protected.

Seeing the deer on the roads was not an uncommon sight, but the citizens are all used to them and all the cars slowed down when driving near the park. Killing a deer is illegal and even used to be punishable by death.

Today the deer are a symbol of Nara and hundreds of tourists come to see them and feed them every day – even us. We bought some deer crackers from a local seller and we soon became popular among the deer. The deer are extremely tame, but some of them became quite aggressive when the crackers were gone and they still wanted more. One of them even stole our city map and started eating that, haha! ...... (follow the instructions below for accessing the rest of this article).
This article is featured in the app "GPSmyCity: Walks in 1K+ Cities" on iTunes App Store and Google Play. You can download the app to your mobile device to read the article offline and create a self-guided walking tour to visit the attractions featured in this article. The app turns your mobile device into a personal tour guide and it works offline, so no data plan is needed when traveling abroad.