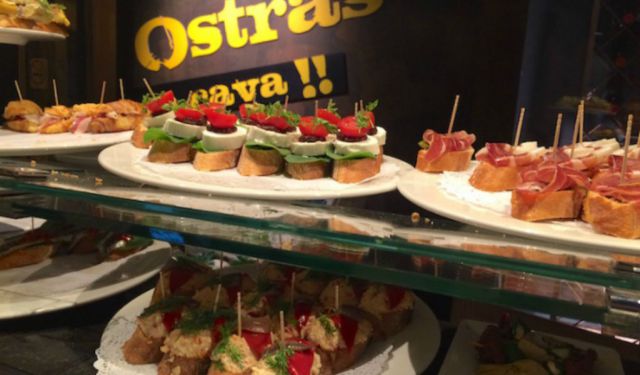 Pinchos and Tapas in Valencia’s Old Town, Valencia, Spain (B)

I clutched my seatbelt tight when the taxi turned from the street onto a walkway. Our driver continued along the sidewalk, nudging pedestrians out of the way and dropped us at the front door of our rental apartment in the tiny Plaza de Cisneros. We were shocked at his brazenness, until another car came along and we realized this was not a sidewalk but a street.

This was our introduction to Valencia, and we were glad that we had decided not to drive ourselves into the center of the Old Town. The maze of narrow streets is part of the charm of the city, but you’d better stay on your toes, looking out for speeding cars, bikes, and Segway tours.

Valencia was once a walled city. The wall stood from the 11th-century until it was torn down in 1865, but two of the original gates to the city, the 14th-century Torres de Serrans and 15th-century Torres de Quart, still stand in the Ciutat Vella (Old City). Here you will also find the Valencia Cathedral, Mercado Central, museums, and an abundance of bars and restaurants. ...... (follow the instructions below for accessing the rest of this article).
This article is featured in the app "GPSmyCity: Walks in 1K+ Cities" on iTunes App Store and Google Play. You can download the app to your mobile device to read the article offline and create a self-guided walking tour to visit the attractions featured in this article. The app turns your mobile device into a personal tour guide and it works offline, so no data plan is needed when traveling abroad.