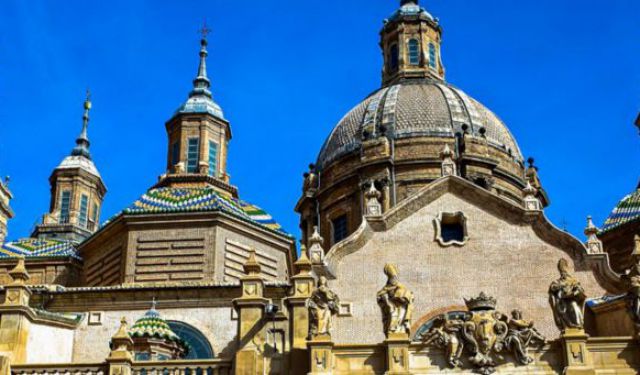 Reminiscent of the great mosques of Istanbul, this Basilica is said to be built in the exact spot that the Virgin Mary appeared to St. James in 40AD. This absolutely stunning piece of architecture is hands down the most important thing to see in Zaragoza. In fact, this legendary structure is so magical that during the Spanish Civil War, three bombs were dropped on the church and none of them exploded.

Located north of the city center this medieval Islamic palace dates back to the 11th Century and is now home to the Aragon regional parliament. If planning a visit make sure to check if parliament is in session, as it is closed most Thursdays, Fridays and teh occasional week.

Also referred to as La Seo de Zaragoza, this Roman Catholic cathedral is a UNESCO World Heritage Site. Once home to a mosque, evidence of several architectural elements remain, including Mudejar, Baroque, Gothic, and Renaissance.  ...... (follow the instructions below for accessing the rest of this article).
This article is featured in the app "GPSmyCity: Walks in 1K+ Cities" on iTunes App Store and Google Play. You can download the app to your mobile device to read the article offline and create a self-guided walking tour to visit the attractions featured in this article. The app turns your mobile device into a personal tour guide and it works offline, so no data plan is needed when traveling abroad.