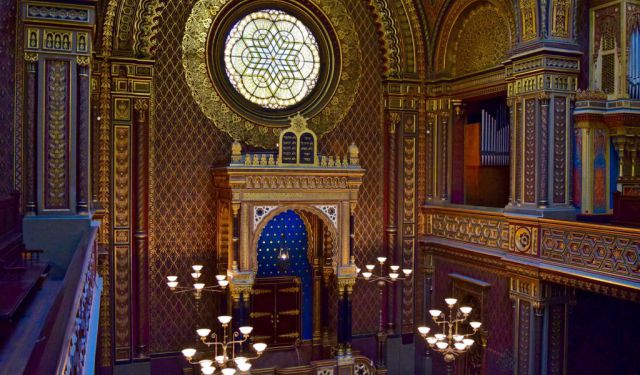 Prague in a Weekend - Part II, Prague, Czech Republic (B)

My first day in Prague visiting the Old Town, Prague Castle and the quarter of Nové Město had been quite prolific, but the Czech capital would still provide me with many surprises. During my second day, I continued exploring the Jewish Quarter of Josefov, Charles Bridge and the modern New Town or Nové Město.

I decided to start my second day in Prague by visiting the Jewish Quarter. Since the previous day was a Saturday, most of the monuments were closed for Shabbat, so I kept most of the day to explore this area, also known as Josefov.

The Jewish community settled in Prague back in the 10th century, but the Jewish Quarter as we know it today dates from the 13th century, when Jewish people had to leave their previous homes scattered around the city and settled in this area.

The community kept growing over the centuries, especially when Jews from other countries, mainly from Germany, Austria and Spain moved to Prague, overcrowding the Jewish Quarter, as they were not allowed to live elsewhere in the city. ...... (follow the instructions below for accessing the rest of this article).
This article is featured in the app "GPSmyCity: Walks in 1K+ Cities" on iTunes App Store and Google Play. You can download the app to your mobile device to read the article offline and create a self-guided walking tour to visit the attractions featured in this article. The app turns your mobile device into a personal tour guide and it works offline, so no data plan is needed when traveling abroad.