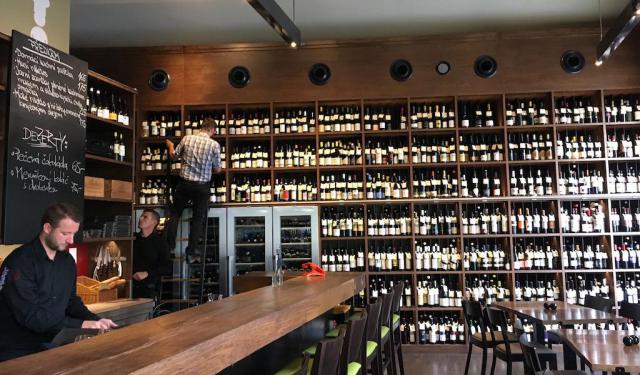 It’s been nearly 20 years since we last visited Prague and, frankly, I cannot recall having had wine back then. The Czech Republic is famous for its beer*, especially Pilsner Urquell, and we drank plenty of it. So on our return, we expected that we would again have to spend our time drinking beer. Our biggest surprise has been the proliferation of wine bars in Prague and the quality of the wines we’ve tried. We arrived in Prague with no experience with Czech wines, since they are difficult to find outside of the Czech Republic, and we’ve been having so much fun tasting and learning about these interesting wines.

The Czech Republic has a 2000 year history of winemaking, but quality winemaking was nearly destroyed by Communism. After World War II, winemakers businesses were turned over to the state, vineyards were nationalized and vines of most varietals were ripped out in favor of varietals that worked well for mass production of cheap wines. Most wines were produced by state run cooperatives, although grape growers were allowed to keep a small amount for their own personal use. After the fall of Communism in 1989, the cooperatives were broken up and vineyards returned to the winemakers. Since then, Czech winemakers have been busy recovering what was lost. ...... (follow the instructions below for accessing the rest of this article).
This article is featured in the app "GPSmyCity: Walks in 1K+ Cities" on iTunes App Store and Google Play. You can download the app to your mobile device to read the article offline and create a self-guided walking tour to visit the attractions featured in this article. The app turns your mobile device into a personal tour guide and it works offline, so no data plan is needed when traveling abroad.