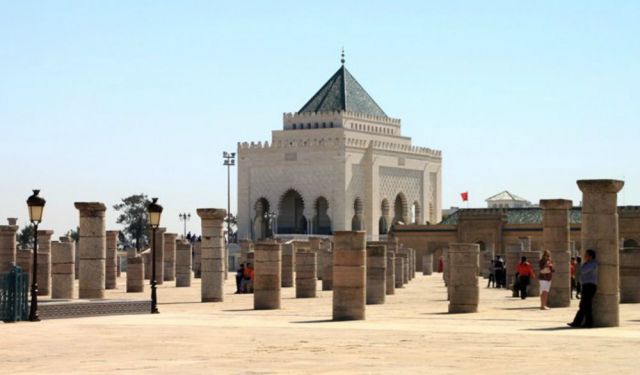 Rambling Around Rabat, Rabat, Morocco (B)

Today we took a day trip from Casablanca to Rabat, the capital city. While driving the 87 km, we learned a little about Morocco. Its population is 35 million of which 40% are Berber. The Arab Moroccan dialect includes French and Spanish thus Arabs from the Middle East can’t understand Moroccans unless classic Arabic is used. Morocco is more progressive than other Muslim nations. Women can drive cars, over 70% of those studying to be a doctor are women, and Morocco even employs a woman judge.

Four different cities have once served as the capital of Morcocco…Fez, Marrakesh, Meknes, and Rabat. The current capital, Rabat, is home to 1.6 million people. Being the political capital, Rabat didn’t seem like it would be that interesting to me, yet I was pleasantly surprised by the 12 Century city.

Our first stop of the day in Rabat was at Dar al-Makhzen, the royal palace and home to the king of Morocco. We saw it from a roped off distance, and this time we were allowed to snap photos of the Royal Guards in winter red. Our visit was quick and we moved on to the Hassan Tower. ...... (follow the instructions below for accessing the rest of this article).
This article is featured in the app "GPSmyCity: Walks in 1K+ Cities" on iTunes App Store and Google Play. You can download the app to your mobile device to read the article offline and create a self-guided walking tour to visit the attractions featured in this article. The app turns your mobile device into a personal tour guide and it works offline, so no data plan is needed when traveling abroad.