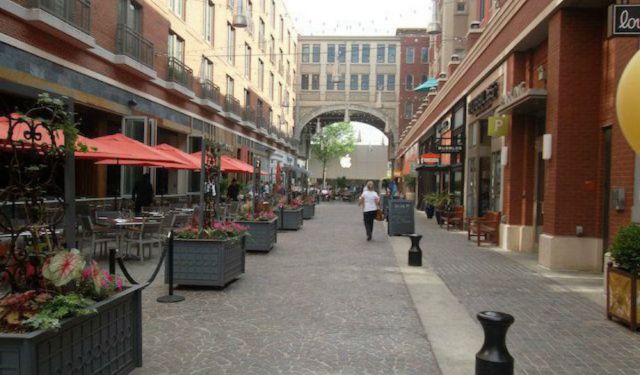 Sometimes it’s nice to get away from the chaos of the city and go where the streets are a little cleaner, the air a little fresher, and the temperature might even be a few degrees cooler. For this food adventure we traveled on the Metro Red Line into the great northwest; the land of the well-to-do.

This corridor of Montgomery County MD and northwest DC contains some of the most affluent communities in the country. The area has a rich history as the site of an ancient Native American trail that later developed into a toll road for farmers to bring their goods into Georgetown. The Georgetown and Tennallytown Railway extended the electric streetcar into Bethesda in 1890 along the route that is now Wisconsin Avenue. Streetcars connected these Maryland suburbs to the city until 1935 when they were replaced by buses. Finally, the Bethesda Metro station opened in 1984.

Just a few miles from the DC line on Wisconsin Ave, the National Institutes of Health and the National Naval Medical Center have been based in Bethesda since the 1940’s, filling the area with science and technology types. In twenty-first century Bethesda, the west side of town has been transformed into Bethesda Row. The centerpiece of this development, Bethesda Lane, opened in 2008 with a pedestrian-only street of restaurants, retail shops and luxury apartments. Last year a Washington Post article described the Aspenization of Bethesda and proposed that it “might be one of the most upscale suburban downtowns in the United States.” Even Fortune Magazine has considered that Bethesda could be the next Aspen due to its “quiet wealth.” ...... (follow the instructions below for accessing the rest of this article).
This article is featured in the app "GPSmyCity: Walks in 1K+ Cities" on iTunes App Store and Google Play. You can download the app to your mobile device to read the article offline and create a self-guided walking tour to visit the attractions featured in this article. The app turns your mobile device into a personal tour guide and it works offline, so no data plan is needed when traveling abroad.