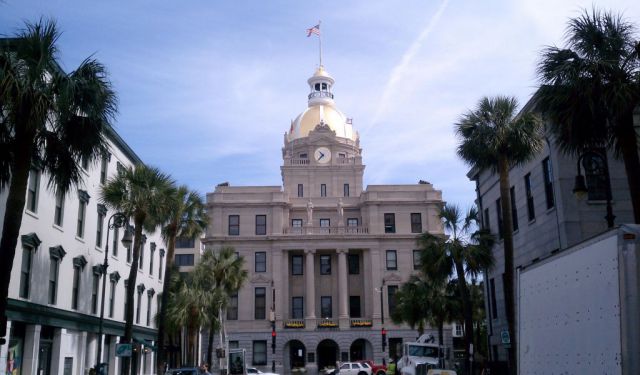 Riverfront Area Between River and Bay Streets, Savannah, Georgia (B)

Savannah’s life-blood is, and always has been, the Savannah River. The river is the city’s highway to the interior, its link to the world and the reason for its economic success across the centuries. The Port of Savannah is the fourth-busiest and fastest-growing container terminal in the United States. You can’t help but have a sense of awe as you stroll along River Street and watch a 12-story high, 900-foot long container ship glide slowly upstream. The ship dwarfs the buildings around you.

200-year-old cobblestones pave Savannah’s River Street, which was once lined with cotton warehouses where the historic cotton exchange still stands. After the Civil War the area was abandoned for over a century. Then in the 1970s it was rediscovered. Local landowners and urban planners decided to revive the history and the glory of old River Street.

In June of 1977, at a cost of $7 million, a new waterfront area was unveiled in the city of Savannah. Some 80,000 square feet of empty, and abandoned warehouse space was transformed into a colorful array of shops, restaurants and art galleries. The urban-renewal project stabilized the downtown area and revitalized the Historic District. Since then, the area has become a popular destination for locals and tourists. Today more than 70 businesses, shops and restaurants are located on River Street. Casual pubs and upscale restaurants sit beside specialty shops and art galleries, and a free trolley rides the tracks embedded in the old cobblestone street. ...... (follow the instructions below for accessing the rest of this article).
This article is featured in the app "GPSmyCity: Walks in 1K+ Cities" on iTunes App Store and Google Play. You can download the app to your mobile device to read the article offline and create a self-guided walking tour to visit the attractions featured in this article. The app turns your mobile device into a personal tour guide and it works offline, so no data plan is needed when traveling abroad.