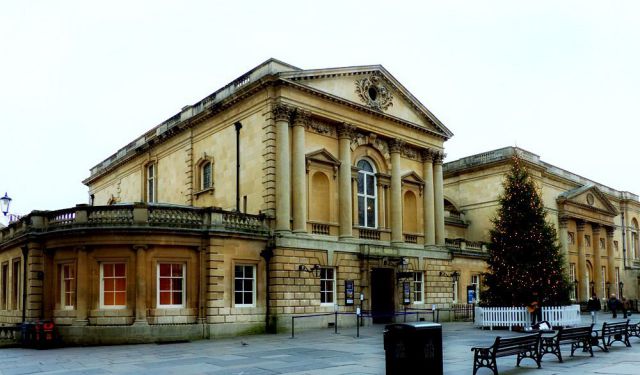 Roman Spa and Hot Springs of Bath, Bath, England (B)

Over the years I have developed a mild obsession with Roman remains, seeking them out across Europe and elsewhere. But even better than ruins are those Roman sites that are still in use today, giving a sense of direct connection to the past. I’ve written before about the Arena of Verona, home to the annual Opera Festival, and the Circus Maximus in Rome, still used for concerts and other events. Another such site is the Roman spa and hot springs of Bath, in the south of England.

Geothermal activity beneath the city of Bath created three hot springs, with water rising at a temperature of 46°C. It is known that the Celts used the site, but tradition dates the first spa activity to Bladud, a local king, in 836 BC. It is said that Bladud and his herd of pigs suffered from leprosy, but that they were cured by the warm mud around the springs.

The Romans were well known for their love of bathing and bath-houses, so it is natural that they would have been drawn to the hot springs of Bath (or Sulis, as the settlement was then known). Over a period of 300 years, starting around AD 70, the Romans built a whole complex of baths, temples, courtyards and administrative buildings around the springs. The town became known as Aquae Sulis (waters of Sulis), and people from all around the Roman empire flocked here to bathe, pray and to be healed by the waters. An early example of mass tourism! ...... (follow the instructions below for accessing the rest of this article).
This article is featured in the app "GPSmyCity: Walks in 1K+ Cities" on iTunes App Store and Google Play. You can download the app to your mobile device to read the article offline and create a self-guided walking tour to visit the attractions featured in this article. The app turns your mobile device into a personal tour guide and it works offline, so no data plan is needed when traveling abroad.