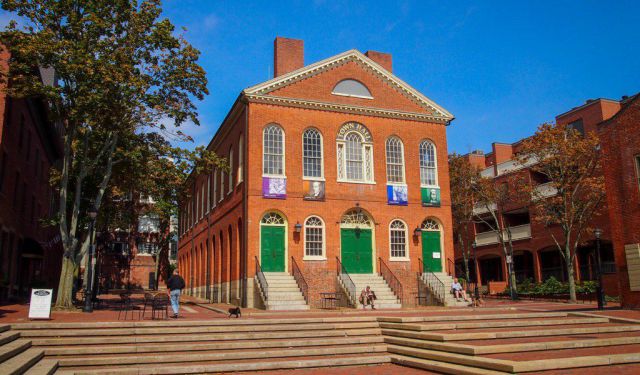 We spent last weekend in Salem and Portsmouth, two beautiful coastal towns located in Massachusetts and New Hampshire respectively. While we had already spent a day in Portsmouth earlier this year, before we got married, neither of us had ever been to Salem.

The name Salem may sound familiar to you. You may have heard about the 17th-century witch trials the town is so (in)famous for. Either way, chances are that you don’t know what exactly happened there.

In the Middle Ages the Catholic church created the stereotype of witches – which in fact were hugely important people in rural communities, as they were the people with knowledge about healing plants and natural medicines – in an attempt to destroy their ‘competition’. I think it is fair to say that they succeeded.

In the spring of 1692 a group of young (and probably bored) girls in Salem Village claimed to be possessed by the devil and accused several women of being witches. Colonial Massachusetts was soon the subject of a mass hysteria and a court was assembled in Salem to judge specific cases. The first person to be convicted was Bridget Bishop; she was hanged in June. Eighteen other people were also executed on Gallow’s Hill and one man was pressed to death. Almost 200 innocent people were accused and locked up in the following months. ...... (follow the instructions below for accessing the rest of this article).
This article is featured in the app "GPSmyCity: Walks in 1K+ Cities" on iTunes App Store and Google Play. You can download the app to your mobile device to read the article offline and create a self-guided walking tour to visit the attractions featured in this article. The app turns your mobile device into a personal tour guide and it works offline, so no data plan is needed when traveling abroad.