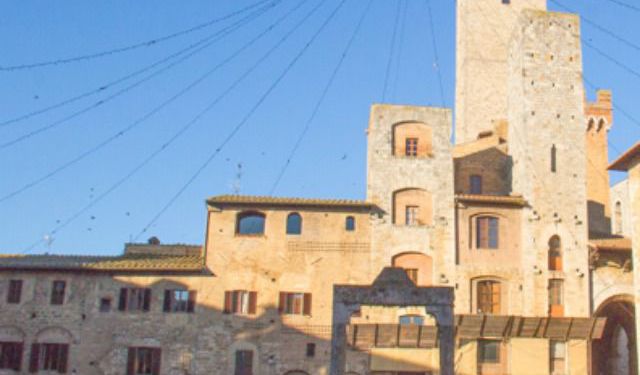 When I got up and threw open the heavy wooden shutters I was very surprised to find that my room overlooked the Tuscan countryside surrounding San Gimignano, It was sp beautiful and ethereal with a wreath of mist hanging over the regimented squares striped with rows of vines. I took some images and shouted buongiorno to a woman who looked up as she was walking down the road below my window. My lodgings, Le Romite were originally a convent and the building was full of character and well-placed for the centre of the old town, my destination for some breakfast.

Across the junction above Le Romite I could see the Piazza Sant’Agostino and decided to investigate as this square was the site of the Convento di Sant’ Agostino and Chiesa di San Pietro in Forliano. Piazza Agostino was deserted although occasionally someone would scurry across the paving stones and go into the large church of the convent in one corner. The well in the centre was decorated by a creation constructed with paper cups which I later discovered was part of an art exhibition in five separate areas of the town. After taking some photos, which was not easy due to the shadows cast by a sun that was low in the sky, I walked up the hill to Piazza della Cisterna. All the bars en route were closed and the only one that was open was Ristorante della Cisterna in the piazza of the same name. I had a cappuccino and a brioche filled with jam. The cappuccino cost the princely sum of €3.50 – I should have remembered it would have been cheaper to stand at the bar to have my breakfast. The bar was busy as people on their way to work clustered around the counter exchanging greetings and swallowing a quick coffee before rushing off again. ...... (follow the instructions below for accessing the rest of this article).
This article is featured in the app "GPSmyCity: Walks in 1K+ Cities" on iTunes App Store and Google Play. You can download the app to your mobile device to read the article offline and create a self-guided walking tour to visit the attractions featured in this article. The app turns your mobile device into a personal tour guide and it works offline, so no data plan is needed when traveling abroad.