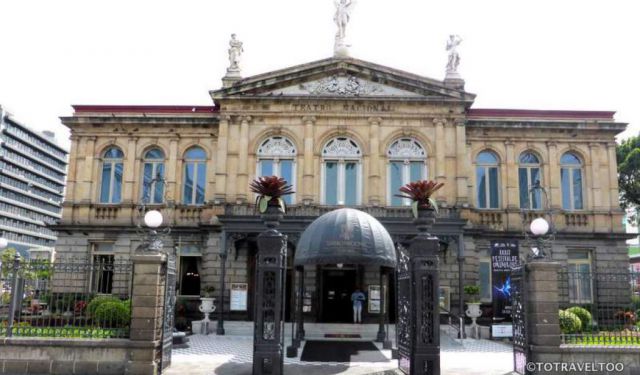 San Jose Costa Rica what an interesting place to visit. We always enjoy a walking tour when we arrive in a new city, you learn so much more from locals than reading from a book. As we were in between Housesitting assignments we decided to spend some time in San Jose, Costa Rica before moving to Panama. We stayed at Casa 69 just a 15-minute walk from our meeting place for the walk.

The most impressive building in San Jose Costa Rica. Apparently, the rich coffee barons of San Jose, returning from visiting theatres in Europe, approached the government in 1890 with an offer of 200,000 gold pesos to build a theatre in San Jose. The government replied to the coffee barons asking them to increase their offer to 3 million gold pesos, they refused saying the increase was too high and that they would stay with their original offer. A tax was levied on the citizens of Costa Rica to help pay for the theatre which was a copy of the Paris Opera House. They imported gold leaf from Germany, crystal from France and the floor laid with Carrara marble whilst Italian sculptor Pietro Bulgarelli’s statues adorn the lobby. ...... (follow the instructions below for accessing the rest of this article).
This article is featured in the app "GPSmyCity: Walks in 1K+ Cities" on iTunes App Store and Google Play. You can download the app to your mobile device to read the article offline and create a self-guided walking tour to visit the attractions featured in this article. The app turns your mobile device into a personal tour guide and it works offline, so no data plan is needed when traveling abroad.