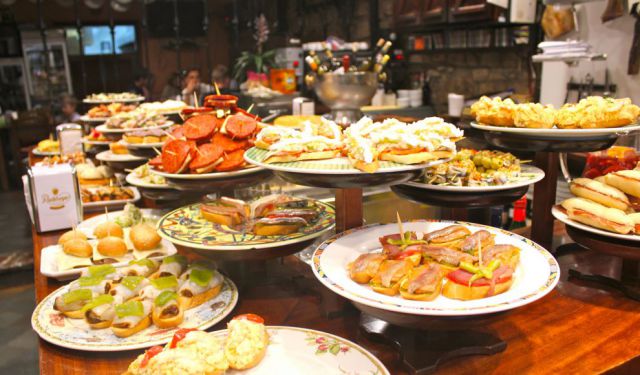 If I’ve ever visited a city that I feel comfortable labeling the capital of taste bud euphoria, it is San Sebastián. I may even say that this city was my favorite gastronomic stop thus far. (That’s saying a lot after Capri’s pizzas and Lisbon’s pastries)

Food is more than just food in the Basque country. It is a way of life. Similar to the rest of Spain, much of Basque culture revolves around their eating practices. The value of food isn’t even close to merely nutritional. Eating is a social affair, an art form and honestly a complete sensory experience.

The Basque Country may have a dense concentration of Michelin Star Restaurants, but their true contribution to Spanish cuisine is the pintxo (pincho). A relative to Spain’s infamous tapa, the pintxo is a small bite sized snack typically served at the bar alongside a mug of beer or glass of wine. Unique from the Spanish tapa, the Basque pintxo (Spanish for “spike”) is usually speared with a toothpick or a wooden skewer. Traditionally in the Basque Country pintxos were served as a small helping of typical Spanish foods, such as ham or tortilla, atop a small piece of toast. They were served with drinks to sober up the bar’s patrons so that they could continue their night and keep on drinking. Today, these scrumptious little finger foods have transformed from simple Spanish toasts and are considered luxury treats in the country of Spain, as well as many other metropolitan cities all over the world. ...... (follow the instructions below for accessing the rest of this article).
This article is featured in the app "GPSmyCity: Walks in 1K+ Cities" on iTunes App Store and Google Play. You can download the app to your mobile device to read the article offline and create a self-guided walking tour to visit the attractions featured in this article. The app turns your mobile device into a personal tour guide and it works offline, so no data plan is needed when traveling abroad.