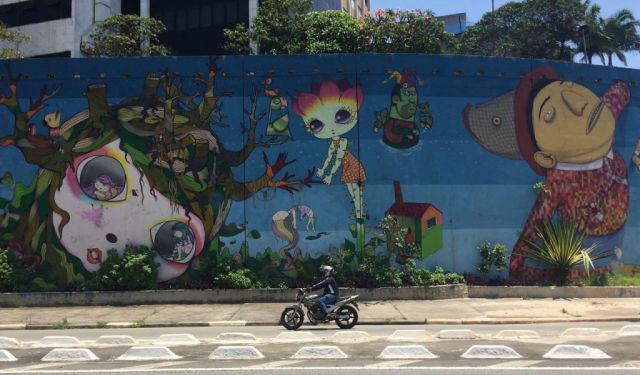 It was two and a half years since my last visit to São Paulo, I returned at the end of August of 2015 and realized that the city was completely covered with graffiti.

I always knew that graffiti art was popular in Brazil, especially São Paulo, because there is a long history of people climbing walls and buildings to express themselves including gangs that use this form of art to challenge each other through signs, codes and tagging.

But this trip was different, there are beautiful and colorful graffiti murals scattered around the city, and some of them are really brilliant and breathtaking.

As a result, Sao Paulo had become a graffiti paradise and has some of the most vital and fascinating graffiti art scenes in the world.

The city is also the home of internationally renowned artists such as Os Gêmeos, Eduardo Kobra and Speto, who have been invited to exhibit their works worldwide in cities like: New York, Miami, Frankfurt, Dubai and Tokyo.

My first weekend in São Paulo I had a visitor from NYC and I decided to take him to some tourist sites. The weather was wonderful and perfect to go to Ibirapuera Park. From the car I could see that the city has basically every public wall and bridge column painted with graffiti, and to be honest I don’t really like it, however my friend loved it. ...... (follow the instructions below for accessing the rest of this article).
This article is featured in the app "GPSmyCity: Walks in 1K+ Cities" on iTunes App Store and Google Play. You can download the app to your mobile device to read the article offline and create a self-guided walking tour to visit the attractions featured in this article. The app turns your mobile device into a personal tour guide and it works offline, so no data plan is needed when traveling abroad.