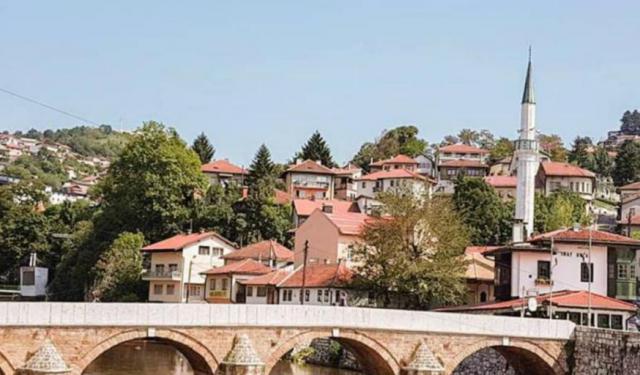 Sarajevo is an up-coming destination for a European city break. It’s a city where east meets west and with every turn through the narrow streets, there’s something to feast your eyes on, history to delve into or some delicious food to eat. Here is our list of the top 15 things to do in Sarajevo.

Head spinning through the winding roads and nearly two head on collisions, after cutting more corners than we took; this was our introduction to Bosnia and Herzegovina! However, our five nights in Bosnia’s capital, Sarajevo, were only going to get better. A lot better! Anyway, we arrived in Sarajevo after a six-hour car journey from Belgrade.

Getting from Belgrade to Sarajevo is made easy with GEA tours. You can call to reserve a seat in a car and you will be picked up from your hostel in Belgrade and dropped off at your hostel in Sarajevo. The cost of the car is €20 per person.

Alternatively, if you don’t plan to enter Sarajevo over-land then you can take a direct flight from most places in Europe. We recommend checking sky-scanner for the latest prices and deals. ...... (follow the instructions below for accessing the rest of this article).
This article is featured in the app "GPSmyCity: Walks in 1K+ Cities" on iTunes App Store and Google Play. You can download the app to your mobile device to read the article offline and create a self-guided walking tour to visit the attractions featured in this article. The app turns your mobile device into a personal tour guide and it works offline, so no data plan is needed when traveling abroad.