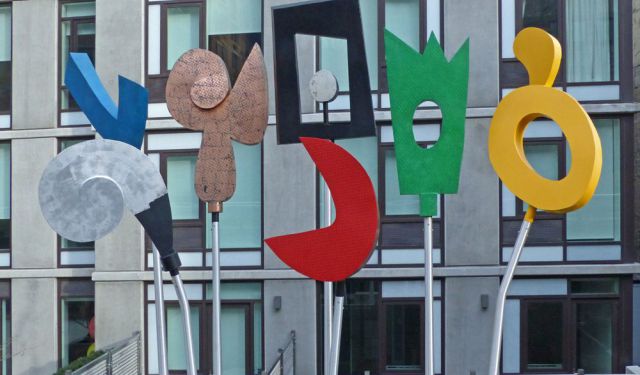 Even on a cold winter’s day New York’s High Line is a popular place. It is somewhere to escape from the noise and the traffic, a peaceful spot where you can enjoy the fresh air and the plants. With the added bonus of outdoor art and sculpture as you walk through the park.

The High Line is an unusual urban park raised high above the ground. It was originally a high level railway line built to remove freight from the city streets. The line was used to move meat and other foodstuffs to warehouses and factories but, with the decline in rail freight, it closed in 1980 and was threatened with demolition. However alternative plans were put forward and eventually the High Line reopened as an urban park in 2002. The park runs for 1½ miles from Gansevoort Street (in the heart of the old meatpacking district) to 11th Ave, West 34th Street. A further small section is planned to open in 2017.

We had our lunch in the appropriately named Serafina Meatpacking, a popular Italian restaurant with a long cocktail list. Then we climbed the steps to the start of the High Line (there are several access points along the line, some with elevators). The park has been planted with more than 200 species of plants, many of them grasses and meadow flowers. Of course, it was winter, and the trees were bare, but the spring flowers were just starting to poke through the ground. I tried to imagine what it would be like later in the year, when the trees were in leaf and the flowers in full bloom. But even now it was a pleasant walk, with various viewing points where you could stop and watch the New York traffic or get a glimpse of the Empire State Building in the distance. ...... (follow the instructions below for accessing the rest of this article).
This article is featured in the app "GPSmyCity: Walks in 1K+ Cities" on iTunes App Store and Google Play. You can download the app to your mobile device to read the article offline and create a self-guided walking tour to visit the attractions featured in this article. The app turns your mobile device into a personal tour guide and it works offline, so no data plan is needed when traveling abroad.