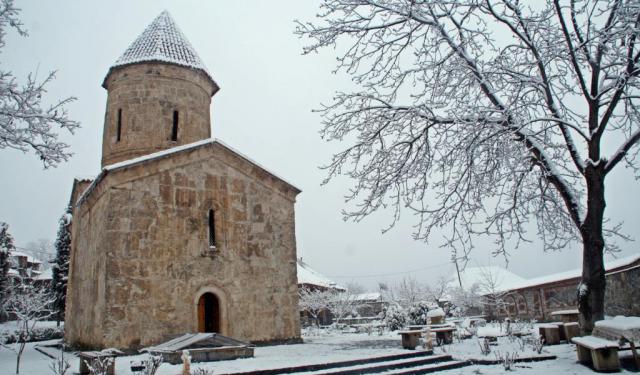 Azerbaijan is not a country that sees much tourism, but when tourists do go there, many tend to stay in Baku for their entire trip, maybe with a few day trips in the nearby area. But Azerbaijan is a lot more than its modern capital. Azerbaijan is mountains, ancient churches and palaces of old khans.

One day, I decided to seek out just that. And my curiousness brought me all the way up in the Greater Caucasus Mountains in the north of Azerbaijan to the city of Sheki, located close by the borders to Russia and Georgia.

Sheki is one of the oldest cities in Azerbaijan and is said to date back more than 2700 years to the Late Bronze Age. The name of the city derives from the Sakas, an Iranian people that wandered up from the Black Sea through the South Caucasus to Anatolia. They reached the territory of modern-day Azerbaijan in the 7th century BC and populated the country for many following centuries.

It was on my second day in Azerbaijan that I decided to catch a bus to Sheki, to escape to the mountains, and stay there for a few days. I needed to spend some time healing in the mountains after my rabies scare and lack of sleep due to travelling to Moscowand then Baku over the course of two days. ...... (follow the instructions below for accessing the rest of this article).
This article is featured in the app "GPSmyCity: Walks in 1K+ Cities" on iTunes App Store and Google Play. You can download the app to your mobile device to read the article offline and create a self-guided walking tour to visit the attractions featured in this article. The app turns your mobile device into a personal tour guide and it works offline, so no data plan is needed when traveling abroad.