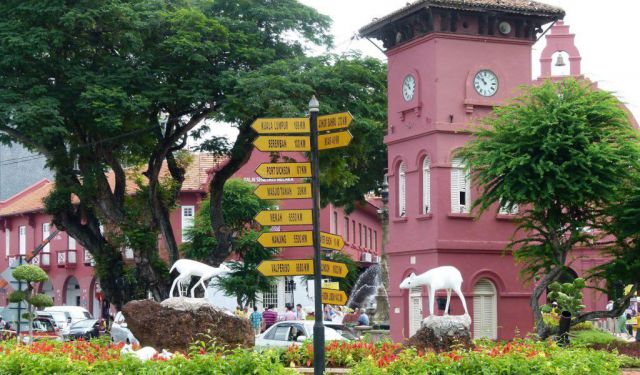 Malacca, on the south-west coast of Malaysia, has a rich and varied history. It occupies a strategic point on the Malacca Strait, which runs between Malaysia and Sumatra, and has been home at various times to the Chinese, Portuguese, Dutch and British. In the middle ages it was an important stop on the trade route between China and the Middle East for ships carrying cargoes of spices, textiles and other goods. By the 15th century up to 2,000 ships could be seen in the harbour at one time. There was an established Chinese community by this time and the Chinese admiral Zheng He often called into the port during his voyages.

The town was taken by the Portuguese in 1511 and was later occupied by the Dutch and the British prior to independence. Today it is a thriving town with smart waterfront developments and a bustling Chinatown. In 2008 Malacca (along with George Town, also on the Malacca Strait) was designated a UNESCO World Heritage Site as an exceptional example of a multicultural trading town in South East Asia. Tourists can enjoy walking the compact town centre and visit the museums that record the town’s heritage. They may also visit temples and go shopping in Chinatown and, of course, eat traditional Malay food in one of the many cafés or restaurants. ...... (follow the instructions below for accessing the rest of this article).
This article is featured in the app "GPSmyCity: Walks in 1K+ Cities" on iTunes App Store and Google Play. You can download the app to your mobile device to read the article offline and create a self-guided walking tour to visit the attractions featured in this article. The app turns your mobile device into a personal tour guide and it works offline, so no data plan is needed when traveling abroad.