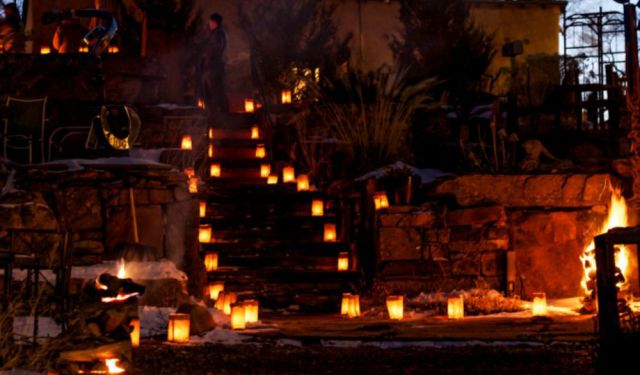 If I were to ever have a love affair with a city it would be Santa Fe. It is an artistic center with a long and vivid history. The city has deep native American roots whom had built villages. Born to Spanish colonists in Mexico, Don Juan de Oñate was the first to try to colonize Santa Fe in 1598. That is fifty years earlier than my hometown of East Hampton was even settled back in New York.

An assortment of wars and revolts between the native pueblo people and French creole fur traders in St. Louis, Spaniard colonialists, Mexican revolutionists and the Republic of Texas painted Santa Fe’s history until the United States gained New Mexico in 1848 and with it the oldest capital in the nation.

Entering New Mexico from Colorado, the Rockies flatten out into plains while red and yellow mountains jaggedly rise from the ground. In the distance the white caps of the Sangre de Cristo Mountains shimmer proudly.

At the heart of Santa Fe is The Plaza, a 400 year old town square. It houses the Palace of the Governors, the erstwhile seat of Spain’s government in the early 17th century. Today it’s a museum dedicated to Santa Fe’s storied past and the square is now a host to native American craftsmen, silversmiths and jewelry makers whom sell their work along its edges. ...... (follow the instructions below for accessing the rest of this article).
This article is featured in the app "GPSmyCity: Walks in 1K+ Cities" on iTunes App Store and Google Play. You can download the app to your mobile device to read the article offline and create a self-guided walking tour to visit the attractions featured in this article. The app turns your mobile device into a personal tour guide and it works offline, so no data plan is needed when traveling abroad.