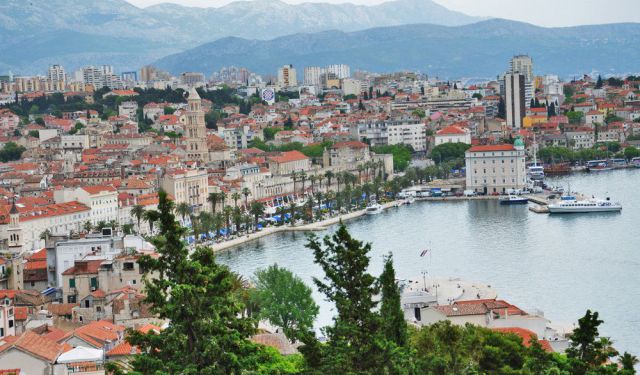 Split in Croatia - Dalmatian City on the Adriatic Sea, Split, Croatia (B)

Split, an ancient city in modern day Croatia, after experiencing some turbulent events of the past wars, now, when the peace has come, witnessed a rapid economic growth, mainly thanks to great improvements of tourist infrastructure. It's the second largest city in Croatia (after Zagreb), and the largest in Dalmatia. Since 2000s, when Croatia invested in tourism industry, Split has become one of the most popular cities to visit on the Adriatic Coast. It owes its charm to the ancient city center situated now where the Diocletian's Palace once stood. Strolling down the narrow streets paved with the white stone from nearby BracIsland can take you back in time almost two thousand years to the era of the Roman Empire.

Split is easily accessibly by air, road or sea. The airport is located 24 kilometers (15 miles) away from the city. It's served by major European Airlines that connect Split with many cities such as Rome, London, Amsterdam and Frankfurt.

Entry to Croatia is easy and citizens from most of the countries do not need a visa or ESTA. To get to Split from the airport, you can take public bus number 37 and 38 (at a very low price) or a direct bus Pleso Prijevoz - 30 HRK (4 EUR / 5 USD) one way or 40 HRK (5 EUR / 7 USD). ...... (follow the instructions below for accessing the rest of this article).
This article is featured in the app "GPSmyCity: Walks in 1K+ Cities" on iTunes App Store and Google Play. You can download the app to your mobile device to read the article offline and create a self-guided walking tour to visit the attractions featured in this article. The app turns your mobile device into a personal tour guide and it works offline, so no data plan is needed when traveling abroad.