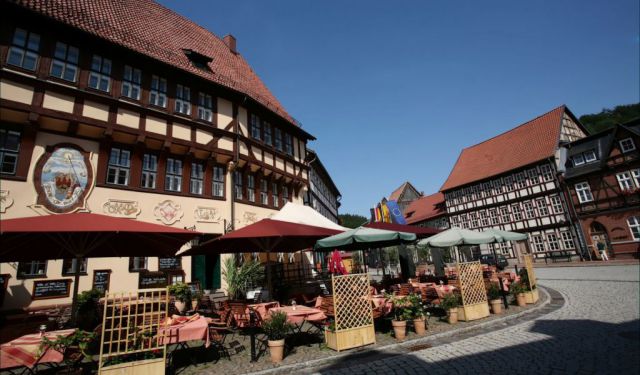 Stolberg: Romantic Germany at its Best, Stolberg, Germany (B)

Last August saw us making our first visit to Germany since our wedding. Whilst Nigel had been to Germany three times in the past, this was to be his first visit to the region where Martha grew up. Where she lived in Germany isn’t easily accessible from Northern Ireland and often involves two flights followed by a lengthy train journey. Luckily for us on this occasion, whilst we still had to take two flights from Belfast City Airport via London Gatwick, we were able to fly to her local airport in Erfurt (with a local airline called Germania). Naturally this route no longer exists as a future option!

And so we arrived in the early evening into sauna like conditions, with the temperature still around 32 degrees C. We had managed to find ourselves in the middle of a heatwave – much to Martha’s delight, as she constantly tells Nigel about how much hotter it is in Germany during the summer compared to Northern Ireland! She may have mentioned this fact on a few further occasions during our stay, when the temperature soared to nearly 40 degrees C during the day. Our home for the next three nights was to be the Hotel Freiwerk in the small town of Stolberg, about 20 minutes from her hometown of Nordhausen. Stolberg is located in the Harz mountains and its name in German literally means mining mountain. The relatively small ’boutique style’ Hotel Freiwerk had been recently reopened, following what was clearly a renovation project where no expense was spared. The Hotel exuded quality throughout, from the interior furnishings to the bathroom fittings. This region is in what used to be communist East Germany before ‘The Wall’ came down. Possibly as a legacy of that, hotel prices are noticeably cheaper than is the case in what was formerly West Germany. ...... (follow the instructions below for accessing the rest of this article).
This article is featured in the app "GPSmyCity: Walks in 1K+ Cities" on iTunes App Store and Google Play. You can download the app to your mobile device to read the article offline and create a self-guided walking tour to visit the attractions featured in this article. The app turns your mobile device into a personal tour guide and it works offline, so no data plan is needed when traveling abroad.