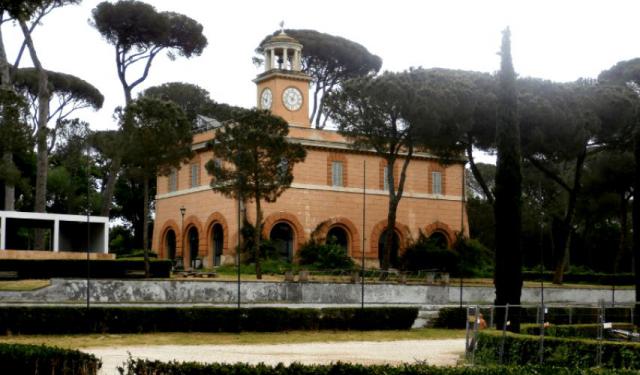 It was a rainy Tuesday when we found ourselves close to the end of our Roman holiday. But the sad weather didn’t stop us: we took the subway to Termini and started to look for an umbrella. There were still some surprising places in Rome, just waiting for us! Oh, I think I forgot to mention this: you know how there are some people, like myself, who collect magnets from the places they visit? Well, Mathieu collects umbrellas. So he is very excited when he gets a rainy day when he is travelling: new umbrella! From Termini station, happily covered by a large rainbow umbrella, we headed to visit yet another building of the National Roman Museum: Terme di Diocleziano.

We had expected Terme di Diocleziano to be an open-air museum, but the largest part of it was indoors. We entered in through a nice rose garden surrounding a fountain, then continued with a visit inside the museum. Finished in the year 306 AD, the Baths of Diocletian were the largest imperial baths at the time. Its pools with water maintained at various temperatures were named in accordance with their properties: calidarium, frigidarium, and tepidarium. They were all supplied by the 2nd century aqueduct Aqua Marcia. Diocletian’s Baths also had a central hall, an outdoor swimming pool, plus several other rooms which served various purposes. Besides the visit in the halls of Terme di Diocleziano, one can also visit the archaeology museum, in a third-century charterhouse designed by Michelangelo himself. I liked catching glimpses of the interior courtyard from various angles, through the windows of the museum. ...... (follow the instructions below for accessing the rest of this article).
This article is featured in the app "GPSmyCity: Walks in 1K+ Cities" on iTunes App Store and Google Play. You can download the app to your mobile device to read the article offline and create a self-guided walking tour to visit the attractions featured in this article. The app turns your mobile device into a personal tour guide and it works offline, so no data plan is needed when traveling abroad.