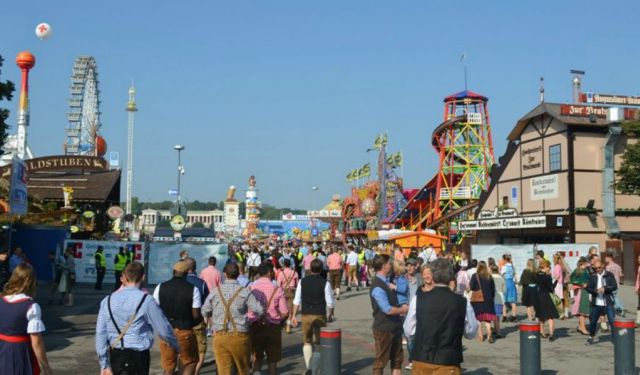 Going to Oktoberfest in Munich is easily the most worthwhile event trip I’ve ever taken. I’ve been to Mardi Gras, I’ve celebrated St. Patrick’s Day in Dublin. By comparison, those events feel like they were pretty cool. But there’s nothing quite like Oktoberfest in Munich.

In part, it’s because there’s literally nothing like it. If you’ve been to a really packed Irish pub with a live jig band, you can approximate the experience of St. Paddy’s in Ireland. But the Oktoberfest block party that the German restaurant in your city throws every year is not a good representation of Munich’s giant beer tents that each hold upwards of 10,000 people. This is like beer Disneyland. So before you continue reading this article, book a flight to Munich for Oktoberfest 2017. It starts September 16 and goes on for 16 days.

Done? Great, I’m proud of you. So here’s how to make the best of Oktoberfest without ending up in the hospital getting your stomach pumped.

I highly underestimated the number of people that would be dressed up. I didn’t, because I thought it would be too cold, and because I didn’t want to be judged for being the tacky American appropriating Bavarian culture. But at least 75% of people there were dressed up, including people that were obviously not German. Most people are too drunk to care what you’re wearing. But without some bitching lederhosen, you might feel out of place. The outfits are almost as important as the beer. ...... (follow the instructions below for accessing the rest of this article).
This article is featured in the app "GPSmyCity: Walks in 1K+ Cities" on iTunes App Store and Google Play. You can download this article for FREE and read it offline on your mobile device.