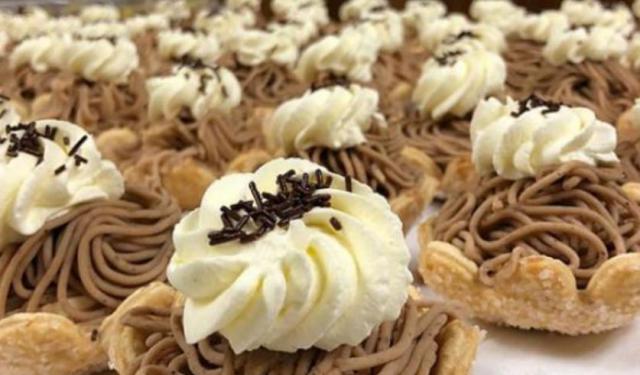 Bündner Nusstorte, otherwise known as Engadiner Nusstorte, is a traditional Swiss short-crust pastry filled with caramelised sugar, cream and chopped nuts (usually walnuts) originated in the canton of Graubűnden where it is produced by small bakeries, each having their own version of the basic recipe. Although known since the 1920s, this nut tart became widely popular only in the 1960s. Remarkably enough, the nuts for its production have to be imported since no nut trees grow in the local climate. The combination of nuts, honey and sugar in this crumbly tart provides a lot of calories, so no matter how much you're starved, a slice of Bündner Nusstorte will bring you back to life in no time, especially if you enjoy it with a cup of coffee or tea.

Just as the name suggests, Basler Läckerli is originally from Basel where it was created some 600-700 years ago by the local spice merchants in order to sustain ecclesiastical members of the Basel Council. This hard and chewy glazed gingerbread is made with honey, candied fruit (peel) and nuts (hazelnuts, almonds), as well as a splash of cherry brandy (Kirsch). While still hot, the flat baked dough is cut into rectangular pieces, and then covered in sugar glaze. Although available all year round, traditionally it is eaten mostly at Christmas. Closely related to the German Lebkuchen, the Läckerli (aka Leckerli or Läggerli) of Basel translates from German as "delicious," and quite rightly so. Beware of the potential dangers it may pose to your teeth though, especially if you have an artificial dental crown or a wobbly tooth, as you won't be the first to seek dentist after giving in to your Basler Läckerli cravings. ...... (follow the instructions below for accessing the rest of this article).
Image Courtesy of Albinfo.
This article is featured in the app "GPSmyCity: Walks in 1K+ Cities" on iTunes App Store and Google Play. You can download this article for FREE and read it offline on your mobile device.