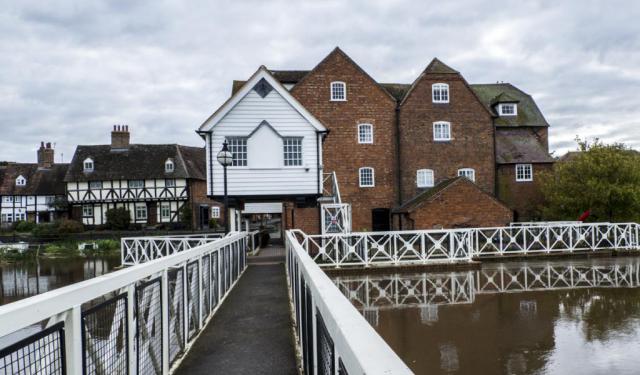 Tewkesbury is a captivating town with its abundance of beautiful historic buildings on the confluence of two important rivers, the Avon and the Severn. Both brought prosperity to the town during the twelfth century when it was important for trade and milling.

As the population of the English town of Tewkesbury in Gloucestershire expanded the growth of the town was restricted by the lack of land. When there was no more space for new buildings the town developed upwards, storey by storey. Each storey jutting out over the one below. Towards the end of the seventeenth century the alleyways began appearing and many people lived down them in cramped, dark and dirty conditions as they also acted as drains and rubbish dumps. Today trade has ceased, the mills have closed but the alleys are now desirable residences and an unusual tourist attraction in the town is the Bloody Meadow the site of a famous battle during the War of the Roses.

Entering Tewkesbury on the A44 from Gloucester visitors cannot fail to notice two enormous oak sculptures. Two horses on either side of the road, one with a rider and one without (this is deliberate) represent a major event in the history of the town – the Battle of Tewkesbury in 1471. Named the Arrivall it represents the one day during the fifteenth century when Tewkesbury was the scene of an historic event that reverberated through England during the War of the Roses. It is positioned on the high ground that the Yorkist army had to cross to see the opposing Lancastrian army and once they had each other in their sights a battle was inevitable. The figures, hewn from green oak, were created by Phil Bews and Diane Gorvin. ...... (follow the instructions below for accessing the rest of this article).
This article is featured in the app "GPSmyCity: Walks in 1K+ Cities" on iTunes App Store and Google Play. You can download the app to your mobile device to read the article offline and create a self-guided walking tour to visit the attractions featured in this article. The app turns your mobile device into a personal tour guide and it works offline, so no data plan is needed when traveling abroad.