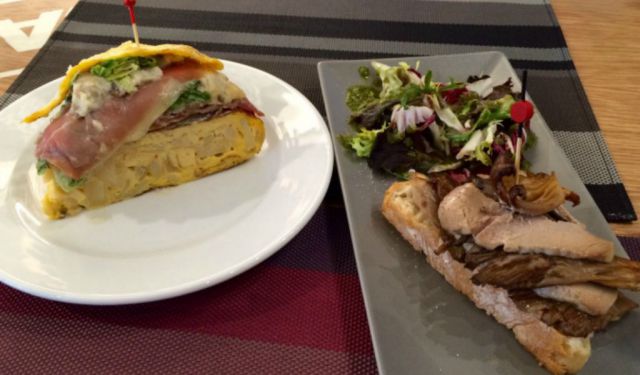 Granada sits at the foot of the Sierra Nevada mountains in the Andalusian region of Southern Spain. Visgoths, Romans, Moors and Christians have left their marks on the city that is now Granada. The Moors surrendered Granada to Catholic monarchs Ferdinand and Isabella in 1492, completing the Reconquista and ending 800 years of Muslim rule in Spain.

Despite all of its rich history, the city has a youthful energy thanks to the University of Granada, which has 80,000 students on five campuses around the city. Granada is filled with young people lounging in the parks and sitting outside at cafes.

Eating out is a favorite past time in Andalusia, and Granada is one of the few Spanish cities where you still get free tapas with drinks. This tradition of always having a bite of food with alcohol goes back centuries. In fact, it is rare to see Spaniards drinking without something to nibble.

The customary way to go for tapas is to move from bar to bar, having a drink and small bite at each spot. It’s no secret that our favorite way to explore a city is by food crawling our way around. Here, food crawling is a part of the lifestyle. ...... (follow the instructions below for accessing the rest of this article).
This article is featured in the app "GPSmyCity: Walks in 1K+ Cities" on iTunes App Store and Google Play. You can download the app to your mobile device to read the article offline and create a self-guided walking tour to visit the attractions featured in this article. The app turns your mobile device into a personal tour guide and it works offline, so no data plan is needed when traveling abroad.