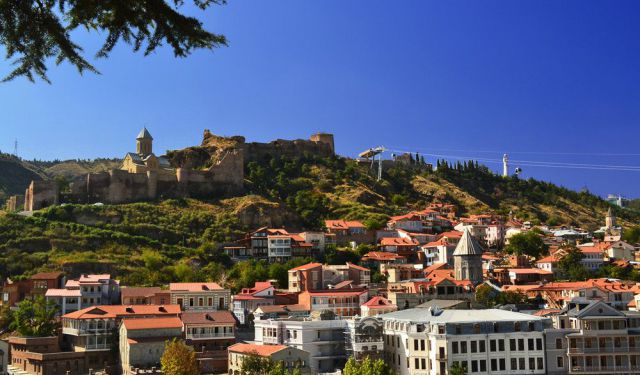 Tbilisi - The City of Great Charm, Tbilisi, Georgia (B)

I bet most of you don't know or have never heard about the country of Georgia (not to be confused with one of the states in the US), let alone its capital city - Tbilisi. Caucasus remains a rare destination for visitors from the west, except those more adventurous. However, if you do decide to visit the region, you will be surprised by its beauty and history.

Tbilisi (formerly Tiflis) is probably the main gateway to this relatively small yet so diverse area of land situated between the Black and Caspian Sea. The country was founded in the fourth century BC by king Farnavaz the first. The remains of the fortress Narikala and defensive walls from the fourth century still overlook the city from the steep cliff on the banks of Kura river. Nowadays, Tbilisi is the metropolis of the region and has a population of more than 1.5 million inhabitants.

It's easy to get to Tbilisi, there are many airlines that fly directly to the city's main airport. You can also get here from Armenia, by an overnight train or a minibus called marshrutka. The journey by marshrutka costs very little and takes around 5 hours from Yerevan. Don't try to get to Georgia from Russia by land, the tensions are still present in the areas near the Russian border. ...... (follow the instructions below for accessing the rest of this article).
This article is featured in the app "GPSmyCity: Walks in 1K+ Cities" on iTunes App Store and Google Play. You can download the app to your mobile device to read the article offline and create a self-guided walking tour to visit the attractions featured in this article. The app turns your mobile device into a personal tour guide and it works offline, so no data plan is needed when traveling abroad.