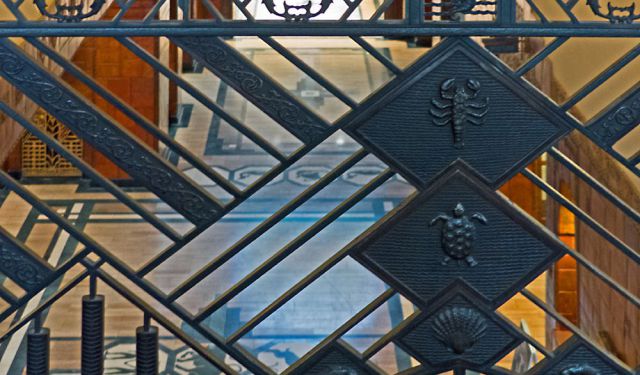 I didn’t even notice it the first time I walked by. Surrounded as it is by Vancouver’s towering office blocks, it is hard to believe that the Marine Building was once the tallest building in the British Empire. But in the 1930s its twenty-one storeys of Art Deco architecture made it the finest building in Vancouver, if not in the whole of Canada. It no longer dominates the city skyline but it remains one of the most important Art Deco buildings in the world.

The Marine Building started out with big ambitions. Opened in 1930, it was intended as a grandiose architectural showpiece and as a base for Vancouver’s then flourishing maritime activity. Both interior and exterior were to incorporate themes of transport and the sea. The Vancouver Sun reported at the time that “the building suggests some great marine rock rising from the sea, clinging with sea flora and fauna, tinted in sea green, flashed with gold, at night a dim silhouette piercing the sea mists”. The interior was no less impressive. ...... (follow the instructions below for accessing the rest of this article).
This article is featured in the app "GPSmyCity: Walks in 1K+ Cities" on iTunes App Store and Google Play. You can download the app to your mobile device to read the article offline and create a self-guided walking tour to visit the attractions featured in this article. The app turns your mobile device into a personal tour guide and it works offline, so no data plan is needed when traveling abroad.