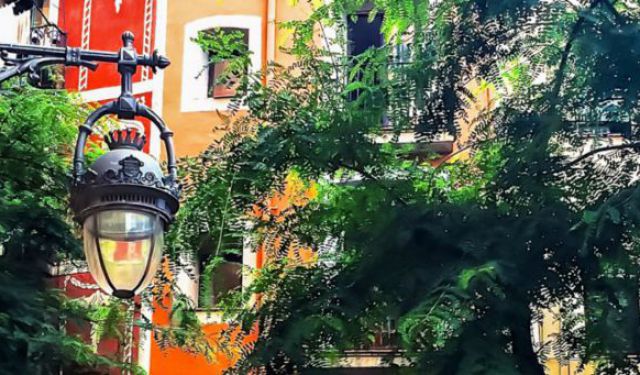 The Best Neighborhood in Barcelona?, Barcelona, Spain (B)

Many would vote for La Rambla, a barrio surrounding the 1.2 km tree lined pedestrian street of the same name, packed with tourists and locals alike, and anchored by the huge open air market dating as far back as 1217, La Boqueria.. Others might choose the trendy Born neighborhood or beachside Barceloneta. But for us, the best neighborhood in Barcelona is the up-and-coming underdog, Sant Pere.

Sant Pere is the oldest district in Barcelona, assembled around a monastery and plaza that’s over 1100 years old. Roman buildings, narrow streets, and medieval walls set the scene. With the amazing modern Mercat Caterina on one end and Barcelona’s Arc Di Triomf on the other, it’s still relatively undeveloped for tourism, with very few hotels or large restaurants..

The Catalan-speaking neighborhood is mainly residential, parents walking their children to the bus, little old ladies slowly doing their daily shopping, skateboarding teens clacking along the cobblestones.. The lack of tourism could construe Sant Pere as “low rent” compared to some of it’s more developed neighbors, but low rent sometimes awakens the entrepreneurial spirit, as evidenced by the numerous tiny shops and galleries that dot the neighborhood. Here are just a few of the reasons why we think Sant Pere is the best neighborhood in Barcelona: ...... (follow the instructions below for accessing the rest of this article).
This article is featured in the app "GPSmyCity: Walks in 1K+ Cities" on iTunes App Store and Google Play. You can download the app to your mobile device to read the article offline and create a self-guided walking tour to visit the attractions featured in this article. The app turns your mobile device into a personal tour guide and it works offline, so no data plan is needed when traveling abroad.