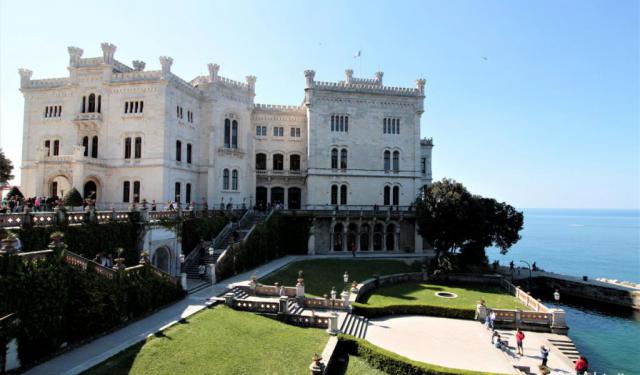 The Curse of Miramare Castle, Trieste, Italy (B)

Like the Empress Elisabeth “Sisi” of Austria, Archduke Ferdinand Maximilian of Hapsburg commissioned Castello di Miramare in 1856 for his beautiful new wife, Charlotte of Belgium to be as far away from the Hapsburg Court as feasibly possible. Intending it to be fit for a queen, this idyllic slice of heaven would become their little love nest, nestled along the coastline and surrounded by 22 acres of gardens and forest with rare and exotic trees.

Like a hawk, Maximilian supervised the construction of his masterpiece and took up residency on the first floor before the castle was even completed. The castle itself would not be completed though until 1864, after Maximilian and Charlotte moved to Mexico, where Mexican monarchists had been advocating his ascension to the throne since 1859. Napoleon III was looking to turn Mexico into a new satellite state with a nominal emperor as a figure head. Holding no real power in Italy and wanting a more challenging role, Napoleon III chose the Archduke Maximilian, who finally consented and the two love birds headed for Mexico to assume their new titles as Emperor Maximilian I and Empress Carlota of Mexico in Mexico City. ...... (follow the instructions below for accessing the rest of this article).
This article is featured in the app "GPSmyCity: Walks in 1K+ Cities" on iTunes App Store and Google Play. You can download the app to your mobile device to read the article offline and create a self-guided walking tour to visit the attractions featured in this article. The app turns your mobile device into a personal tour guide and it works offline, so no data plan is needed when traveling abroad.