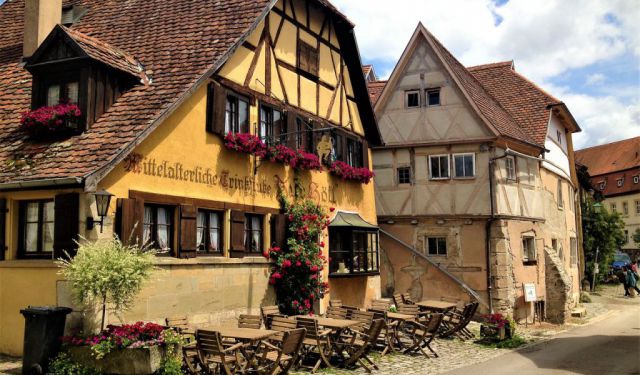 Do you remember as a little girl flipping through the pages of your Disney fairy tale books, dreaming about being a princess and living in such an adorable town that couldn’t possibly be real? Ya, me too. Well guess what?? Such a down does exist, right here in Bavaria, Germany! Colorful half-timbered houses, crooked lanes and mystical houses bring to life those Disney books worn from too much day dreaming.

Rothenburg ob der Tauber is a little Medieval town that is still surrounded by its original wall that was built to protect the city in Southern Bavaria. The name translates to “Red fortress above the Tauber”. The Tauber is the small river the flows just below the town. It is part of the Romantic Road in Bavaria which also leads you to Würzburg and down to Füssen. And it is every bit of romantic as it implies!

The origins of this beautiful Middle Ages town dates back all the way to the 12th Century. It had a lot of prestige and wealth but was destroyed during the 30 Years War as it was invaded and again during WWII. Both times, the town was rebuilt exactly as it had been. Afterwards, the Black Death came in 1634 and killed many more towns people, therefore preserving the size of the town as it stopped growing. Little has changed in this town from the times where towns needed to protect themselves from invasion which makes walking through this town more like walking through a story book. Except there were no knights in shining armor… ...... (follow the instructions below for accessing the rest of this article).
This article is featured in the app "GPSmyCity: Walks in 1K+ Cities" on iTunes App Store and Google Play. You can download the app to your mobile device to read the article offline and create a self-guided walking tour to visit the attractions featured in this article. The app turns your mobile device into a personal tour guide and it works offline, so no data plan is needed when traveling abroad.