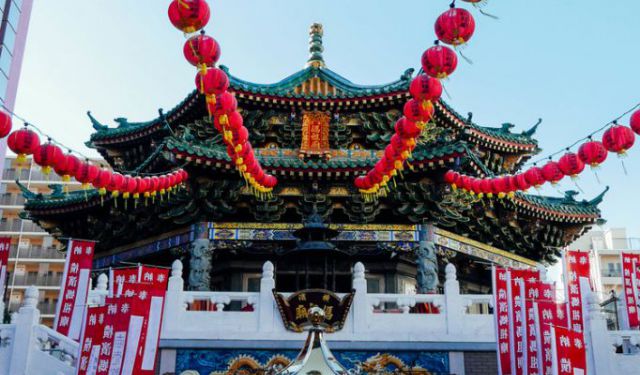 The Foreign Neighborhoods of Yokohama, Yokohama, Japan (B)

When Japan finally opened its doors to the world in 1859, the little fishing village of Yokohama was the first port to conduct foreign trade. As a result, Yokohama grew to become what is now Japan's second largest city - one with a distinctly cosmopolitan feel. Both Western and Chinese traders settled here, establishing two foreign neighborhoods: Westerners took over the hilltop Yamate area (aka, "the Bluff"), while the Chinese created a bustling Chinatown that remains Japan's largest. I ventured south to check them out (and binge on dim sum!).

With distinctive Western architecture and an abundance of churches, this neighborhood feels far removed from Japan. Walking through the quiet, wide streets of Yamate reminded me a bit of my last home, San Francisco. Tack on the nearby Chinatown and the resemblance is uncanny. There are Spanish and American Victorian-style homes, views of a Bay bridge in the distance, rolling hills and plenty of palm trees.

Most of the original foreign residences in the Yamate area were destroyed by the Great Kanto Earthquake, so the buildings here are primarily dated from 1923 or later. Eight of these historic homes have been preserved and are now open to the public as museums - all free to enter. I visited the Bluff just before Christmas, when each home decorates for the holidays in the style of a particular country. As a Westerner, I didn't find the homes themselves that exciting to visit, although it was intriguing to see how the Japanese interpreted the Christmas decor of Western countries (spoiler alert: it has more to do with tableware than trees and lights). Mostly I felt small pangs of nostalgia for America while touring the homes (clawfoot tubs, sigh) - the modern residential buildings in Tokyo certainly have their perks, but I often find myself missing the charming quirkiness of our century-old San Francisco apartment. ...... (follow the instructions below for accessing the rest of this article).
This article is featured in the app "GPSmyCity: Walks in 1K+ Cities" on iTunes App Store and Google Play. You can download the app to your mobile device to read the article offline and create a self-guided walking tour to visit the attractions featured in this article. The app turns your mobile device into a personal tour guide and it works offline, so no data plan is needed when traveling abroad.