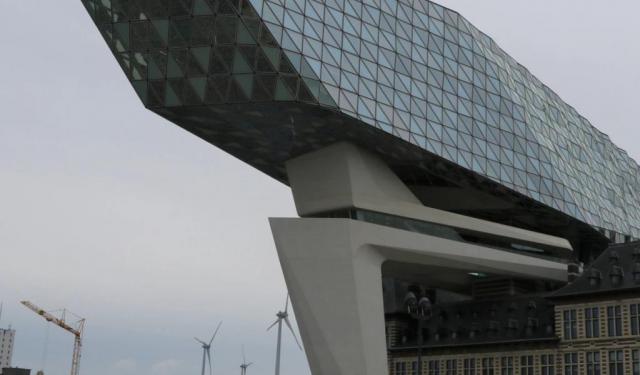 The Harbour of Antwerp Through Past and Present, Antwerp, Belgium (B)

The harbour of Antwerp is larger than Antwerp itself… Historically, it allowed the city to become one of the most prominent in the world during its Golden Age in the 15th and 16th centuries. Today, it provides 150,000 jobs, greatly contributes to the wealth of the region of Flanders and propels Antwerp as the second city of Belgium. Hop on a bike to discover Europe’s second largest harbour (after Rotterdam), between capsize bulk carriers and cute villages surrounded by nature.

From the heart of Antwerp, where the harbour used to sprout in front of the medieval fortress of Het Steen, it is only a short bicycle ride to reach today’s industrial harbour. Along the way, former open warehouses line the shore of the Scheldt River, all the way to the Bonaparte Dock, the oldest dock designed by the French emperor Napoleon in 1811. Today, the museum dock is the foreground for the MAS (Museum Aan de Stroom) that has become an iconic building in the city. From the rooftop of this red sandstone modern tower, a reminder of the historical brick warehouses of Antwerp, the view on the city and its harbour are unobstructed. Wind turbines, oil refineries and the cooling towers of the Doel nuclear power plant compose the manufactured landscape of today’s docks, sprawling all the way to the Dutch border, about 20 kilometres North West of Antwerp. ...... (follow the instructions below for accessing the rest of this article).
This article is featured in the app "GPSmyCity: Walks in 1K+ Cities" on iTunes App Store and Google Play. You can download the app to your mobile device to read the article offline and create a self-guided walking tour to visit the attractions featured in this article. The app turns your mobile device into a personal tour guide and it works offline, so no data plan is needed when traveling abroad.

Create Your Own Self-Guided Walks in Antwerp
Guide Name: The Harbour of Antwerp Through Past and Present
Guide Location: Belgium » Antwerp
Guide Type: Self-guided Walking Tour (Article (B))
Author: Marcella Van Alphen
Read it on Author's Website: https://bestregardsfromfar.com/2021/07/01/visiting-antwerp-harbour/
Sight(s) Featured in This Guide: