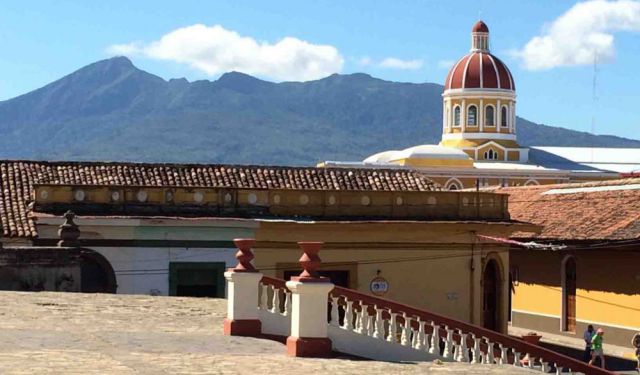 The Markets and Cathedrals of Granada, Granada, Nicaragua (B)

Today was one of leisure. After our breakfast of eggs, fruit, and gallo pinto, we headed out to the local market, just a few blocks off the plaza. At first glance it didn’t look that big, but soon we found ourselves following the locals through a maze. Booths lined the streets and indoor buildings and included a variety of products…Colgate, Speed Stick, dresses, backpacks, buckets of rice, vegetables, crabs on a string, and piles of raw chicken. All I could think of were people in the Amazing Race having to locate a particular booth. It was fun to see the life of the locals.

From the market we strolled along the streets checking out old buildings, cathedrals, and street painting. We briefly stopped at the Museo de Convento de San Francisco that didn’t seem that exciting from the facade. There was a cool mural on an inside wall as well as a rose garden in the court yard, but it didn’t entice of enough to pay only $1 to continue inside. Perhaps I should have completed some research about Granada before I arrived. According to http://www.nicaragua.com, The Convento de San Francisco was erected in 1525 and burned by pirates in 1665 and 1685. William Walker, the American filibuster burned it yet again. Being rebuilt multiple times, the only part of the building that remained original were the outer walls, the vestibule and part of the tower. I suppose we shouldn’t have judged a book by its cover as it is famous for it catacombs that house remains of 75,000 people and it’s library is full of books and paintings depicting Granada’s violent past. Perhaps I will have to return to Granada again one day, as it is a neat city. ...... (follow the instructions below for accessing the rest of this article).
This article is featured in the app "GPSmyCity: Walks in 1K+ Cities" on iTunes App Store and Google Play. You can download the app to your mobile device to read the article offline and create a self-guided walking tour to visit the attractions featured in this article. The app turns your mobile device into a personal tour guide and it works offline, so no data plan is needed when traveling abroad.